Apple Has Killed The Physical SIM Slot With iPhone 14, At Least In The US

Apple today announced its new iPhone 14, iPhone 14 Plus, iPhone 14 Pro, and iPhone 14 Pro Max products and all four of them have one thing in common — they don’t have a SIM tray.

Apple’s announcement confirmed that some of the rumors were true and that the new iPhones would only support eSIMs and not physical ones, although this only appears to be the situation for those buying the new handsets in the United States. At least for now.

The eSIM support isn’t particularly new. iPhones, iPads, and Apple Watches have supported the digital SIM cards for years, but this is the first time that Apple has removed support for physical cards from its iPhone lineup.

iPhone 14 Pro and iPhone 14 Pro Max remove the SIM tray for US models, enabling users to more quickly and easily set up their device.

Apple says that each iPhone 14 can store up to six eSIMs at one time, while the iPhone 14 Pro models can support eight. 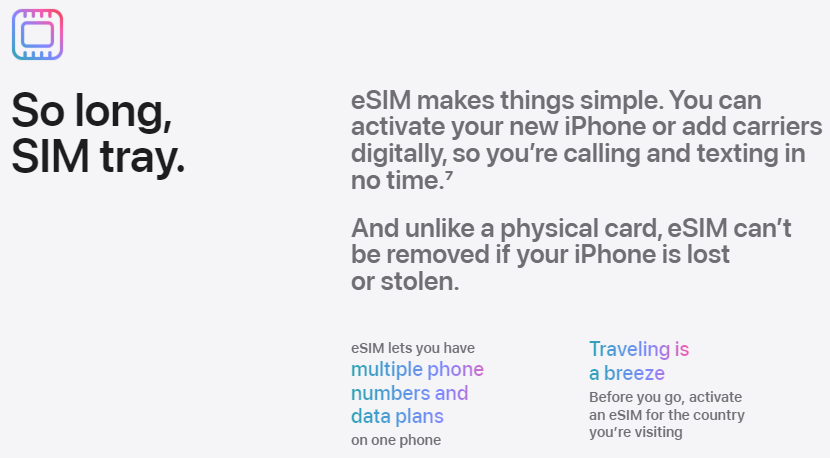 eSIM allows users to easily connect or quickly transfer their existing plans digitally, is a more secure alternative to a physical SIM card, and allows for multiple cellular plans on a single device. iPhone 14 Pro and iPhone 14 Pro Max remove the SIM tray for US models, enabling users to more quickly and easily set up their device.

It’s still early days for this move and it’s difficult to know whether it will be a popular one in the long run. The ability to use multiple eSIMs on a single device is something that many will enjoy, for example.