Apple AirPods Accounted For 71% Of All Wireless Headphone Revenue [Report]

Apple’s AirPods are super popular, that isn’t a surprise to anyone. But just how popular they are might be more shocking with new data from Strategy Analytics claiming that Apple has a massive slice of the pie. Even as much as 71%.

According to the report, Apple sold around 60 million AirPods and accounted for more than 50% of the shipments of totally wireless headphones. And Strategy Analytics isn’t expecting that to change anytime soon, either.

Even as other vendors enter the TWS segment, Apple will remain the dominant vendor in the category through the middle of the next decade.

Amazingly, the report also notes that Apple received 71% of all totally wireless headphone revenue globally. And while Apple was roundly expected to sell around $4 billion-worth of AirPods during the 2019 holiday quarter, that is just the start. The report believes that we can expect AirPods domination to continue for the foreseeable future.

Wholesale revenues will grow past US$100 Billion by 2024. TWS is fast becoming a new revenue stream for many smartphone vendors. Apple will see its non-iPhone revenues soaring with the help of Beats and AirPods in 2019 and in the future. 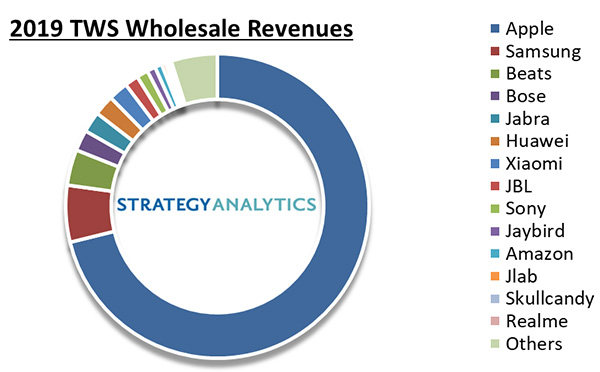 Some people are still looking for Apple’s next big hit, but in reality it’s been staring them in the face for years. AirPods are massive, and that isn’t going to change. It’s also highly unlikely that Apple will look this gift horse in the mouth and start bundling AirPods with its headphones, too.