We’ve discussed on multiple occasions how fragmentation is Android’s Achilles Heel. Despite all the many advantages that the open source nature of the operating system brings to users, it’s no hidden truth that OEMs often tend to delay newer Android builds for even not-so-old devices (or cancel them altogether) simply because they want customers to upgrade to the latest phone to get their hands on the latest and greatest that Android has to offer. Nowadays, it’s not just the one year old smartphones that suffer this dilemma – even the reigning flagships see considerable delays in getting updates to the latest available version of Android. Galaxy S4 is just one example from Samsung.

When Google made Android 4.4 KitKat available almost 3 months back, a lot of manufacturers announced plans for making the new version available on their top of the line phones in the months to come. Still, not everyone has been lucky. HTC has pushed Android 4.4 to the Google Play Editions of its HTC One flagship, and then the Developer version of the device saw an update to KitKat as well. Motorola did the same for a couple of its offerings, too. However, Samsung’s Galaxy S4? Still nada. That is, until now. Courtesy of SamMobile, a test firmware for Galaxy S4 GT-I9505 has become available, and it’s based on nothing other than Android 4.4.2 KitKat!

The new firmware, which carries build number I9505XXUFNA1, comes with an Open Europe CSC and is available in Odin flashable format. The build date appears to be Thu, 2 Jan 2014 23:30:51 +0000 and it pretty stable, even for a test firmware. Since it’s an official firmware, it automatically spells good news for compulsive flashers, as it won’t increase your counter in Odin/Download mode on your device. 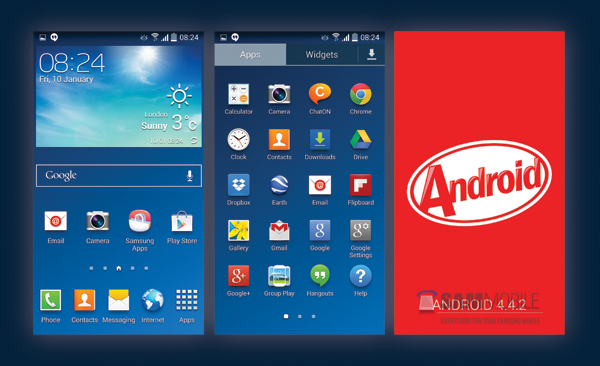 As far as the changes in the new build go, there are very few visual ones. For one, the status bar icons now conform to KitKat standards of white against transparent, and look considerably better. Keyboard layout in landscape orientation has been optimized, as well as gesture typing, making things all the more usable. According to SamMobile, performance has seen a slight improvement as well, with benchmarks scores going above what we saw with Jelly Bean Android 4.3. Sealing the deal is a camera shortcut on the Galaxy S4’s lock screen.

Should you be interested in trying the new build out, head over to the source link below, where you will find not only the download links for the test firmware, but also all necessary instructions.