When Apple announced AirPods Pro the biggest deal was undoubtedly the addition of noise cancellation. But there were other improvements under the hood that largely went unnoticed. Like an improvement in Bluetooth latency, and now new testing has highlighted exactly that.

According to Stephen Coyle, a musician and software developer, Apple’s AirPods Pro have noticeably improved Bluetooth latency compared to the AirPods that came before them.

Coyle had two tests in mind in order to test how different AirPods handled Bluetooth latency.

I use two pieces of software to play the audio I’m measuring. First, the default iOS Keyboard as it’s probably the most common place people encounter this issue. Second, a game I developed called Tapt. This is a good benchmark because I’ve written the game with a specific need for low audio latency, and I’m familiar with its technical underpinnings.

Once the tests were devices, Coyle had to set about running them. And run them he did.

With each combination of device and software, I trigger 10 sounds in a row, using a metronome set to 90 bpm to keep things consistent. For the keyboard run, I discard the first tap for the reasons given above (in a context where latency really matters, developers can easily do what I’ve done with Tapt). Finally, averaging these 19 measurements gives the latency figures, which I quote below. 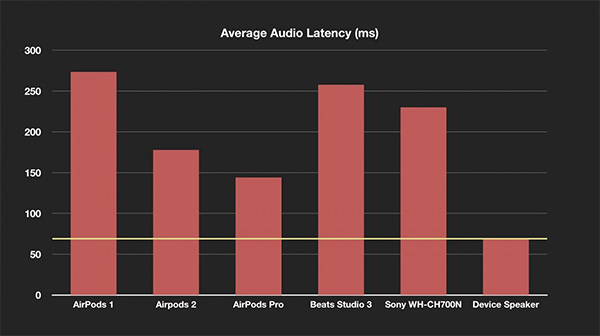 So how did things pan out? Well, AirPods  with Apple’s original W1 chip showed a latency of 274ms. the 2nd generation AirPods, using the W1 chip, measured 178ms. And Apple’s latest AirPods Pro came in at 144ms.

Coyle says that the difference between the original AirPods and AirPods Pro is larger than the numbers might suggest, with the latter now meaning that “the AirPods Pro [are] tantalizingly close to seamless.” That’s a big deal for anyone who has suffered with the affects of Bluetooth latency before.