One of the most common uses of the smartphone – besides doubling as a camera, a music player and internet communications device – is as an organizer. iOS comes with built-in apps like Calendar, Clock and – more recently – Reminders which are made for this exact purpose: to help us orchestrate our daily life.

I’m a big fan of the Reminders app which was included with iOS 5. It’s not as thorough as Things or as innovative as Clear, but it nails the basic requirements of a to-do list app.

Now, a new productivity app takes Reminders’ straightforward feature-set and adds integration with apps installed on your iOS device. How it does this and how this affects users is discussed in detail after the jump! 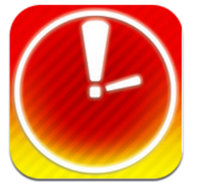 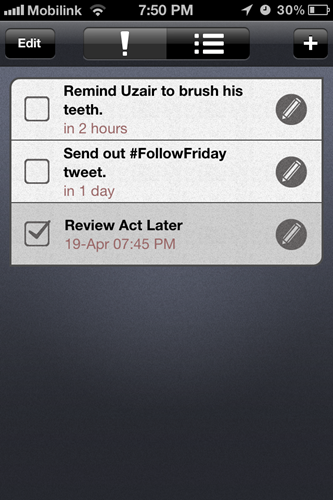 Developed by Designlapp, Act Later is a unique to-do list app whose unique feature is its ability to work with not just pre-installed first party apps, but also third-party apps users install from the App Store.

Those of you who have used Reminders on iOS will be feel at home with Act Later’s user-interface. It’s main menu shows a list of tasks that you have previously created. Tapping the + icon in the top-right corner takes users to the task creation menu from where they can describe the task, schedule it (or not) for a certain date/time, set it repeat itself and, most importantly attach an Action to it. 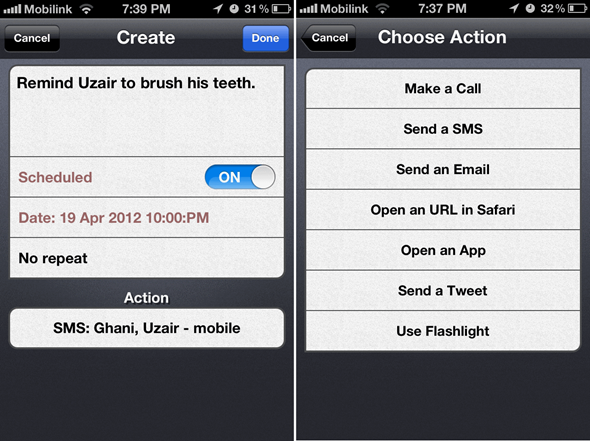 Act Later comes with 7 different types of Actions that you can attach with tasks. So if you set a task to “Call Waisybabu”, you can attach the Make a Call action with it so that when the reminder comes up later on, tapping it will take you straight to the phone app with the number typed in. There are other actions such as Send an SMS/Email, Open a certain URL in Safari, Send a tweet, use flashlight and open third party apps such as Atomic Browser, Echofon, Facebook, Tumblr, Tweetbot, Navigon and more.

Once the task is ready, you can tap Done to include it in your list. If you schedule the task, you will reminded of it at the set time in the form of a notification in your Notifications Center. Tapping this notification will take you straight to the attached Action. 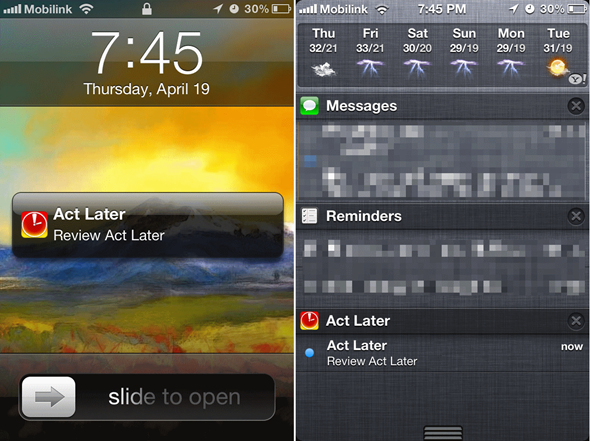 Actions is pretty much what separates Act Later from the plethora of to-do list apps available on the App Store. It is a pretty unique feature that we feel Apple should’ve included with Reminders in the first place; until that happens, you can always use Act Later!

We’ve tested Act Later on an iPhone 4S on iOS 5.1 and can confirm that it works as advertised. 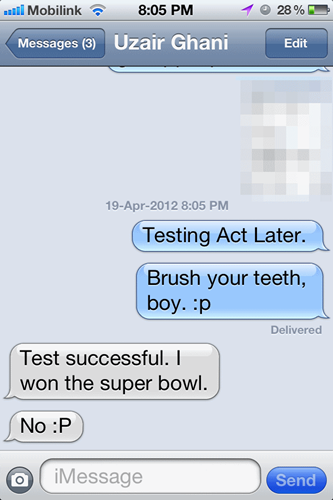 Our only gripe with the app is that it isn’t available in the form of a trial version: Act Later is only available as a $0.99 purchase from the [App Store].

If you’re an organization junkie, I highly recommend you give Act Later a try. Tying tasks with Actions is an idea totally worth $0.99!