Earlier today, Pod2g took to his Twitter timeline to confirm to the world that his upcoming untethered jailbreak for devices running iOS 5.1.1 is in its final stages, and will be released in the coming days, but no exact ETA was given. And now, Xvolks, who is a part of Pod2g’s jailbreak team has shown off the untether in action on video using an updated version of the tool which gained a lot of fame and attraction a few months back, Absinthe.

Absinthe was released in January this year, and is currently the only tool which can successfully untether an iPhone 4S and the iPad 2, provided that they are both running on iOS 5.0.1 or earlier.

It now looks highly likely that Absinthe 2.0 will be the upcoming tool which will jailbreak 5.1.1 devices untethered, and also as you’d expect, it will be the only tool out there which will be able to jailbreak the new 3rd-gen iPad. 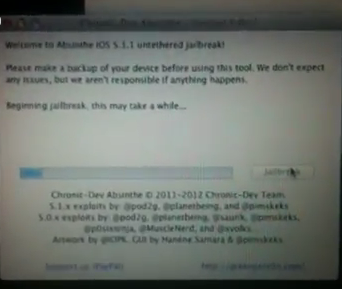 The video was posted by Xvolks on Twitter a while back, and shows off the GSM version of the iPhone 4 being successfully pwned on iOS 5.1.1.

As you can see from the video, Absinthe 2.0 is pretty much a carbon copy of the original Absinthe tool to which we’re already acquainted to, except that the device and firmware support has been significantly widened. And according to Xvolks himself, the jailbreak works flawlessly on the iPhone 4, the GSM version at least. But, it’s worth noting that further testing on other devices needs to be carried out before the tool is handed over to the public for consumption.

Also, it’s worth noting that this iOS 5.1.1 untethered jailbreak will not support all iOS devices when it’s available, but we’re hoping that the device support will be increased gradually as time goes by. You can check out and see if your device is supported by the upcoming jailbreak by heading over to this link.

It’s just a matter of time now before Absinthe 2.0 iOS 5.1.1 untethered jailbreak is made available to the public, and judging from the progress of the video, we believe that the good news will be out very soon! And as usual, we’ll keep you up to speed with the latest updates regarding all things jailbreak, so stay tuned!