Today, saw something we don’t see every March, and that is a brand new iPad announcement. Now, yes, there was a new iPhone in the shape of the iPhone SE and we were also treated to new Apple Watch bands along the way, but for those who like their iOS devices a little larger than a smartphone, the iPad is the big deal from today’s announcements.

An update to the iPad Air lineup, but with additional support for the Apple Pencil and Smart Keyboard and an altogether more iPad Pro-like specifications with camera from iPhone 6s series, the iPad Air 2’s replacement isn’t an iPad Air at all after Apple unveiled the first 9.7-inch iPad Pro. That’s right – the iPad Pro now comes in two sizes. That carry the same name. Because iPad naming conventions weren’t complicated enough.

Naming aside, the new, small(ish) iPad Pro is quite the impressive machine, especially for those that fancied themselves an iPad Pro and Apple Pencil combination but just couldn’t face the idea of carrying around a 12.9-inch tablet. At 9.7-inch, the newly announced iPad Pro is considerably more manageable in the hand and that shouldn’t be discounted.

But what’s this? The iPad Air 2 is still around, you say?

With all this talk of iPad Pros and Apple Pencils, it’s easy to miss the fact that Apple has kept the iPad Air 2 around and dropped the price a tad, making it quite the bargain considering the beefy specification and great split-screen capabilities that it offers. Admittedly, the lack of any Apple Pencil support may put some off when the iPad Pro is around, but the iPad Air 2 should not be discounted by those who don’t need a stylus, or foresee a situation where they use it to death initially and then put it in a drawer to be forgotten about. You know it happens.

With so much choice in the iPad lineup right now, what you need is a table that shows exactly what each tablet is capable of and what features it possesses. Thankfully, Apple maintains such a table, and we’ve embedded it below so you don’t have to hunt it out. We’re kind like that, you see.

If an iPad is on your shopping list, then be sure to check the table out because, without it, the iPad lineup can be something of a minefield. Choose wisely. 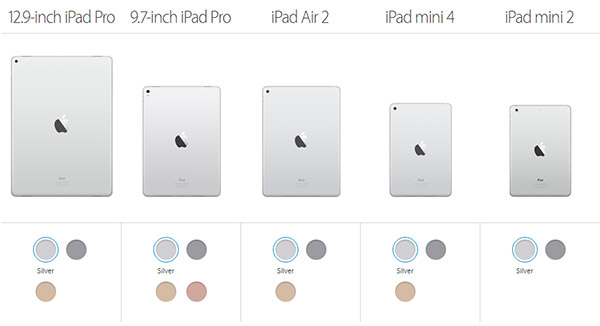