8 Things To Love About iPhone 8 According To Apple [Video]

Apple’s iPhone 8 and iPhone 8 Plus are now officially on sale, and as you might imagine the hyper machine is in full force. Keen to ensure people do not forget about the new iPhones with so much attention lavished on the upcoming iPhone X, Apple has launched a new 45-second promo that highlights just why the iPhones 8 are so impressive.

The video covers “8 things to love about iPhone 8” and is set to the song “Namesake” by Tunde Olaniran. 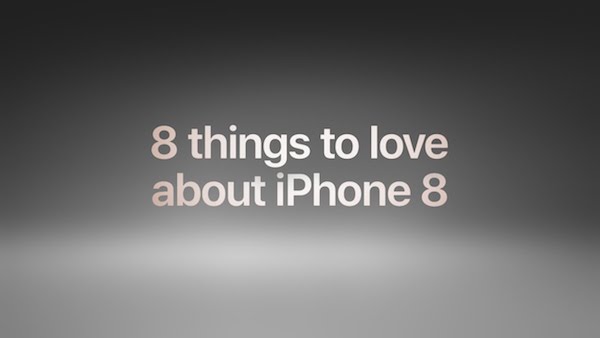 The video, which includes all of the main talking points relating to the new iPhone 8 and iPhone 8 Plus, continues a media push by Apple that initially started last Tuesday when an array of new products were announced. Focussing on the iPhone 8 for a moment though, Apple’s video has plenty to shout about:

– Most durable glass in a smartphone
– Portrait Lighting (the new Portrait Mode feature)
– Wireless charging with Qi inductive chargers
– The A11, the smartest most powerful chip in a smartphone
– The world’s most popular camera
– Water resistant
– New Retina HD display with True Tone
– Augmented Reality support

Both the iPhone 8 and iPhone 8 Plus went on sale around the globe on Friday alongside the Apple Watch Series 3, as well as the updated Apple TV 4K. The other product announced during the same event, the high-end flagship iPhone X, will not go on sale until November 3rd. Even then, stocks of the exciting new direction for the platform are expected to be limited to say the least, so for now the iPhone 8 and iPhone 8 Plus really are the cream of the crop in Apple’s smartphone lineup.

Early reviews suggest that even with the iPhone X around the corner, these new handsets should not be discounted by potential buyers, especially thanks to that hugely impressive A11 Bionic CPU that has been shown to smoke everything else out there, alongside the cameras which have been ranked by DxOMark as the best in mobile.

You can check out Apple’s video for iPhone 8 below: