As any iOS user knows, Mobile Safari is a fast and an efficient browser, but it’s not the most feature-packed. 360 Web Browser is a new mobile browser that provides a very functional browsing experience, with features such as Flash transcoding on certain sites for watching Flash video within the browser, and simultaneous downloads. 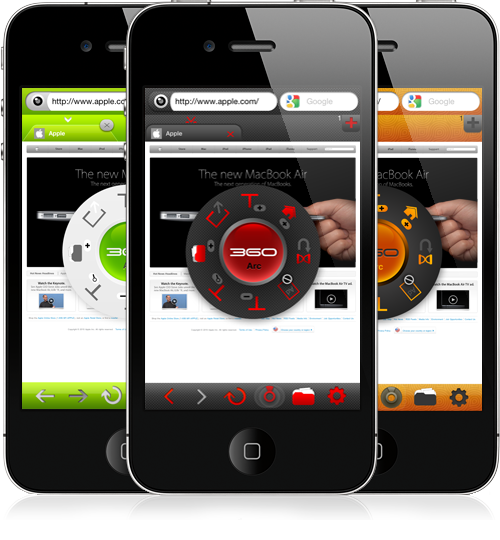 One of the first things you’ll notice about the user interface is its incredibly modern look, with the features right where they were supposed to be. Unlike Safari’s simple look, 360 looks glossy and colorful. Better yet, users can pick between several new color schemes, such as orange, green and blue (see the image above). Basic features you’d expect, such as bookmarking management, are right there as well.

After digging a little bit deeper, users will find the first feature Mobile Safari currently doesn’t offer: real-time downloads. With the capable devices that Apple currently ships, with excellent internet connectivity and processing power, it would be to expect that a browser would enable users to do something as basic as downloading multiple files at once. With 360, there’s now a dedicated download section that displays all the downloads currently in progress, as well as those that have finished off recently, much like what can be found in the desktop version of Safari. What can’t be found in Safari, however, is straight-forward Dropbox uploads: if users choose to, all their downloads will show up on their Dropbox account for later use.

Aside from the various user experience enhancements this browser puts forward, it also boasts some technological ones. 360 includes a strong plugin architecture, allowing developers to extend the browser’s functionality. Thanks to a plugin known as Clip Converter, for example, videos from popular video sites, namely YouTube, Sevenload, MySpace, Dailymotion, Vimeo, Metacafe, MyVideo and Veoh, can be downloaded and played immediately. It’s not a perfect solution for watching Flash video on iOS devices, but it brings us a step closer to that reality.

Using Firefox on your desktop machine? If so, you’ll be delighted to know that 360 comes with Firefox Sync support built right in, allowing users to immediately transfer all their Tabs, Bookmarks and History from Firefox right into 360.

There’s a lot more to this browser that can’t be described on just a blog post. Since voice speaks louder than words, check out the demo video below: