Apple updated its 13-inch MacBook Pro earlier this week, adding a Touch Bar and new Intel 8th generation quad-core CPUs in the process. Now early benchmarks of those new computers are starting to appear online and it looks promising indeed.

According to new Geekbench 4 scores for the base model, we can expect an increase of 6.8% in single-core performance and 83.4% in multi-core. The new machine uses a 1.4GHz quad-core Core i5 CPU compared to the previous 7th-generation 2.3GHz dual-core Core i5 CPU.

Perhaps most interestingly, the CPU used in these machines appears to be a modified version of an existing one, likely specifically designed for Apple. It’s a 15W Coffee Lake chip with a max Turbo Boost of 3.9GHz and carries the designation Core i5-8257U. That’s a chip based on the Core i5-8250U, according to MacRumors.

While Apple claims that the new machine is “two times more powerful,” we’ll have to see how these new benchmarks translate into real world usage. There has long been a debate as to whether scores like those generated by Geekbench actually translate into what people will see when they start using new machines. But given it’s all we have at the moment, it’s still plenty to go on, especially when comparing with other machines running the same benchmarking app.

Whether or not you’re excited to see the arrival of the Touch Bar to the lowest end MacBook Pro, more performance is always something that can be agreed upon as a very good thing indeed. 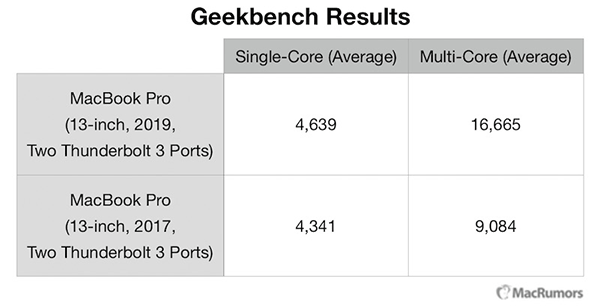