In order to give testers something additional to sink their teeth into, Apple has today made the fourth pre-release seed of iOS 10.3.2, macOS Sierra 10.12.5, watchOS 3.2.2, and tvOS 10.2.1 available for instant download. This immediate release not only continues the development of the aforementioned platforms, but continues to take developers and public testers by surprise who literally had no idea that the Cupertino-based company would be releasing these relatively minor versions of the various platforms. Released approximately four weeks ago, the first, second and third betas introduced minimal changes and functionality additions, and this fourth pre-release follows that trend. 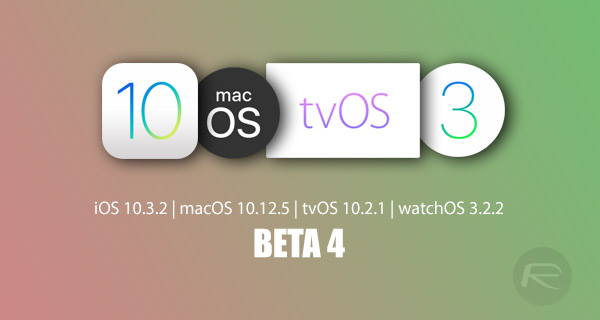 It’s fair to suggest that iPhone, iPad, and iPod touch owners generally like to have a ton of new features to experience with every release. With iOS 11’s first public reveal just around the corner, it’s likely we will get a glimpse of what’s to come, but where iOS 10.3.2 is concerned there isn’t a great deal to get excited about. Unless you love nothing more than stability improvements and internal patches, of course. With this beta, Apple is continuing to make changes internally, including fixing issues with SiriKit and CarPlay.

For those registered on the Apple Developer Program, the official beta 4 IPSW is now available via the developer portal. For an over-the-air update with a configuration profile installed, simply head to Settings > General > Software Update.

Unlike macOS 10.12.4 which introduced the highly anticipated Night Shift feature, macOS 10.12.5 doesn’t really bring anything new or noteworthy. As we have come to expect from small point updates of this nature, Apple has simply introduced bug fixes, under-the-hood improvements, and usability additions to try and make the experience a lot better for those running Sierra on any Mac hardware.

For anyone running any previous version of the beta, macOS 10.12.5 beta 4 is available right now via the Mac App Store. Of course, if you are part of the Apple Developer Program, you can also grab the update from Apple’s developer portal with minimal fuss.

Apple is once again using a minor point update to try and consolidate the Apple Watch experience. Rather than bringing any new changes or outward-facing improvements, this latest beta is all about very minor changes brought about to build on what has already been introduced.

This latest watchOS 3.2.2 beta can be directly downloaded and installed to the Apple Watch by using the iPhone-based Watch app and heading to the Software Update mechanism (General > Software Update).

We’re expecting a glorious unveiling of tvOS 11 at this year’s Worldwide Developers Conference. We literally can’t wait for that, but it also means that we are unlikely to see any huge improvements of feature additions brought into tvOS before then. Like you would expect, this minor tvOS update attempts at improving stability, as well as introducing a number of fixes and usability improvements.

The easiest way to get up and running with this latest version is if you have a beta configuration profile installed is to simply head to the update mechanism in Settings and grab the latest beta as an over-the-air update. If you’re looking for a fresh, clean installation, it’s possible to grab the latest IPSW file directly from Apple and install to the Apple TV using a USB-A to USB-C cable, and of course, iTunes.