Apple has today made available for download the second pre-release seed of iOS 10.3.2, macOS 10.12.5, watchOS 3.2.2, and tvOS 10.2.1. Released approximately two weeks ago, the first beta seed of the aforementioned platforms took developers and public testers by surprise given how quickly it arrived after a general consumer release of iOS 10.3. However, armed with the knowledge that we have yet another version of the company’s major platforms to test, we can jump right in and start taking each seed as it comes. 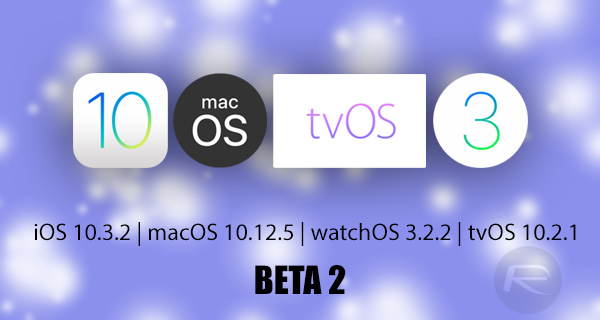 Given that this is a relatively minor point release, and the fact that it has followed on so closely from Apple’s issue of iOS 10.3 and 10.3.1, it’s acceptable to not have a ton of new features and functionality to dive into. Instead, Apple has chosen to focus on improvements and fixes, including the addition of a fix for SiriKit which means that apps and experiences built on this framework for CarPlay will now function as expected. Other than those few mentioned fixes, Apple has looked to stabilize and improve iOS from an under-the-hood perspective.

If you are a registered and enrolled member of the Apple Developer Program you can grab the IPSW update file from the developer portal. Additionally, if you’re already running a beta version of iOS on your iPhone or iPad and have beta configuration profile installed, simply head over to Settings > General > Software Update section of the device to grab the OTA update.

Available via the Mac App Store, beta 2 of macOS 10.12.5 follows hot on the heels of the initial beta, and looks to consolidate the improvements made with macOS 10.12.4. Apple introduced the excellent Night Shift feature with macOS 10.12.4, but there is nothing really of note to speak of with this latest release. In fact, like most releases with this point notation, the Cupertino company’s engineers are looking to try and provide a more stable experience, with an enhanced user-experience across all Macs.

For those that are running the initial beta, macOS 10.12.5 beta 2 is available right now via the Mac App Store. Of course, if you have the required credentials, you can grab the update from Apple’s developer portal.

Like iOS 10.3.2 and macOS 10.12.5, Apple is using watchOS 3.2.2 as a way of consolidating previously introduced changes and functionality, and making the Apple Watch experience a more seamless and pleasurable one. Rather than a new splurge of feature additions, what we have here is a minor point update, available to download right now, with small incremental changes and under-the-hood improvements.

watchOS 3.2.2 beta 2 can be downloaded and installed to the Apple Watch by using the accompanying iPhone app and heading to the Software Update mechanism (General > Software Update).

This probably won’t come as any great surprise, but tvOS 10.2.1 beta 2 isn’t rammed full of goodies and outward-facing features that will keep Apple TV owners happy and content with hours of exploration. In fact, like the recent iOS, macOS, and watchOS updates, tvOS 10.2.1 is all about streamlining and small improvements through under-the-hood and behind-the-scenes updates. Of course, if any new inclusions do become apparent through use we will be sure to let you know right away what they are.

If you have an Apple TV 4 running a beta configuration profile, simply head to the update mechanism in Settings and grab the latest beta as an over-the-air update. If you’re looking for a fresh, clean installation, it’s possible to grab the latest IPSW file directly from Apple and install to the Apple TV using a USB-A to USB-C cable, and of course, iTunes.