The dust may just be settling on the big Xbox One reveal earlier, but with everyone already asking when the console will be available and for how much, Microsoft has begun the pre-order process nice and early.

Set to be released later this year, but with no announced release date as yet, the Xbox 360’s successor is going to be on store shelves no later than 2013 holiday season which means we’ve all got around six months before we need to stump up our hard, cold cash in exchange for Microsoft’s latest must-have bag of tricks. Even with such a long lead time though, plenty of people are clambering to put their money down to ensure they can pick an Xbox One up at the earliest opportunity.

To that end, Microsoft has launched a website for those wishing to pre-order nice and early, though it’s less of a pre-order and more of a reminder: you’re not actually ordering anything here, but merely asking Microsoft to keep you up to date on Xbox One information as and when it becomes available.

Microsoft is so keen to get people onto its mailing list that it is actually paying them to sign up. If you give the company your details, they’ll give you $10 of Microsoft Online Store credit in return. You can’t say fairer than that!

Link to Microsoft Store pre-order site for Xbox One can be found in source at the bottom of this post. 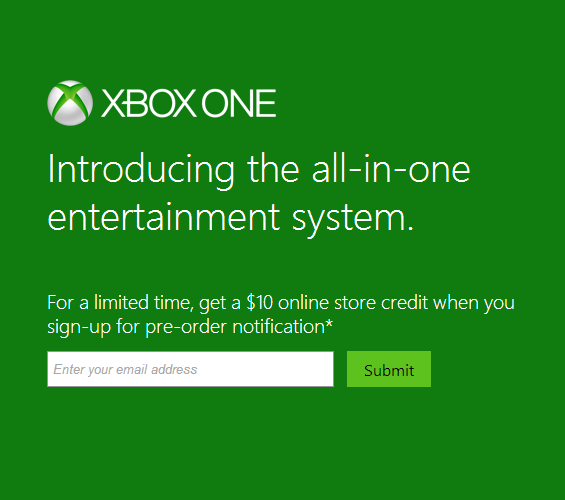 Plenty of online retailers are also offering similar services, and some are even happy to take a small deposit from gamers in order to guarantee delivery come the end of the year. Considering we don’t have a price, or indeed a release date, we’re not sure we’d be handing any money over just yet. Having said that, the hardcore gamers amongst us won’t really care what it costs, especially considering the amount of time left to save those pennies!

Microsoft’s big Xbox One announcement took place just hours ago, and social networks are abuzz with discussion centering around the game console. Will Microsoft’s focus on TV, at least in the United States, detract from the gaming experience for example? We’ll find out in due course.

Until then, we’ll be looking forward to E3 and the undoubted flood of games we’ll see for Microsoft’s new baby.