Didn’t manage to snag tickets to WWDC 2012? Fear not, for one group of plucky people is putting on a WWDC clone.

Apple’s Worldwide Developer Conference is the biggest thing on a developer’s calendar. Offering workshops on all things Mac and iOS, the get-together is more than just an excuse to meet up with all your developer friends and have a few drinks, although that is one of the added bonuses.

As everyone knows though, getting hold of a WWDC ticket is easier said than done, and we are fairly sure you’ve got more chance of getting a Golden Ticket from Willy Wonka than you have of being in the right place at the right time in order to get a WWDC ticket.

Thankfully, though, some people know just how difficult it is to get WWDC tickets, and as a result of this year’s event selling out in just 2 hours, they have conspired to put on their own event. When? The exact same time as WWDC.

The Indie Developer Lab is loosely connected to the people behind the hugely popular WWJC, the jailbreak event that has seen massive popularity since its inaugural event last year.

There are currently few set-in-stone facts about the Indie Dev Lab because, to be honest, it was only thought up as soon as WWDC sold out. With that in mind, there are still some loose ends to tie up, but we are told that the event is very much on, and that more information will be made available over time, hopefully. 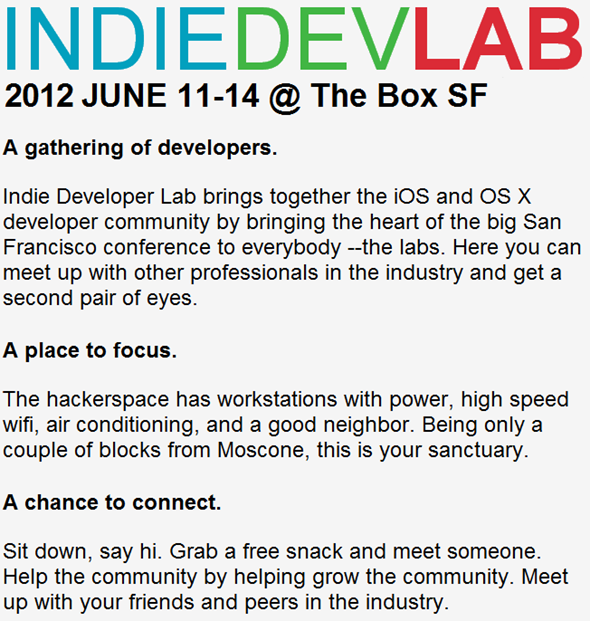 Right now, anyone interested should check out the event’s official website for information and registration. What we do know is that the event will run from June 11th to the 14th and will be in San Francisco.

Indie Developer Lab brings together the iOS and OS X developer community by bringing the heart of the big San Francisco conference to everybody –the labs. Here you can meet up with other professionals in the industry and get a second pair of eyes.

It’s great to see the community coming up with its own fix for Apple’s WWDC popularity, and the more developers that can make it to the Indie Dev Lab, the better.