WhatsApp For iPhone Updated With Fix For Storage-Hogging Bug

Facebook has launched a new, updated version of the WhatsApp for iOS client that, amongst other things, fixes a bug that could see the app repeatedly get into an iPhone’s remaining storage space.

If you’re using a smaller capacity iPhone like an 8GB iPhone 5c or even the 16GB base-model iPhone 6s, you will already be acutely aware that keeping any space free on your iPhone is something of a juggling act. That kind of thing isn’t going to be made any easier if one particular app continuously gobbles up any space you may have due to a bug. In fact, that sounds downright infuriating.

So with WhatsApp 2.12.15, Facebook claims to have put right whatever was causing the issue in the first place. A couple of weeks ago, a new WhatsApp feature was added to allow PDFs to be sent and received and it is this update that appears to have caused some issues. Whether the problem stems from the new feature itself or a bug related to something else that was somehow introduced during that update is unknown at this time, but initial reports do suggest that this new version of WhatsApp is allowing users to reclaim some of their lost space again, as you can see in the “What’s New” list of changes below. 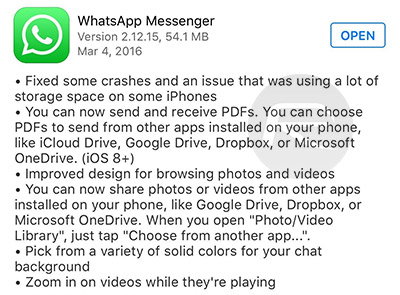 Changelog for WhatsApp’s latest update, with the storage space bug as well as the PDF sharing feature highlighted at the top of the list

Getting your hands on this new, updated version of WhatsApp is a case of just opening the App Store and downloading the update, which is about as easy as things can get in this day and age. If you’ve been suffering from disappearing storage, then we suggest downloading this update as soon as possible, clearing out some space and then perhaps rebooting your iPhone to see how things stand. Hopefully, you will not only have some extra space back, but it shouldn’t go missing again any time soon.