WhatsApp For iOS 7 Leaks In The Wild [Screenshots]

As well as bringing a plethora of new features and options to its user base, iOS 7 also carried a visual overhaul, with most of the UI elements having been altered in what has been an extermination job on the previously omni-present skeuomorphism. As such, developers have been readily updating their apps to comply with the new look, and while many of the major devs have already pushed their new, aesthetically adjusted versions, the famed cross-platform WhatsApp Messenger remains very much in the era of iOS 6. New leaked screenshots, however, offer a flavor of what could be in store once that update does finally make the App Store, and just like the Messages app, it appears clean and in-keeping with the rest of the OS.

As opposed to just being renders cooked up by somebody with a dab-hand for Photoshop, it would seem as though these shots are indicative of the eventual update to be released. Leaked via the Twitter handle @HackiPhone and provided by @0xmaciln, the screenies are said to be taken from a beta release of WhatsApp for iOS, so hopefully, once the kinks have been ironed out and this build is primed and ready for the end user, we should be able to add WhatsApp to the growing list of iOS7-ified apps.

Of course, it’s not critical that apps look as though they were designed for iOS 7, but for the purpose of uniformity, it’s good to see that many of those behind the most popular apps seem to be making these alterations as a matter of priority.

As you can see from the screenshots, everything does seem as you might expect, with a nice clean, minimalistic appearance throughout. The old-style app icon does stand out as a bit of a throwback among the sea of flatness, but with this still being a beta and all, you’d hope that an iOS 7-like icon will also make the final cut. 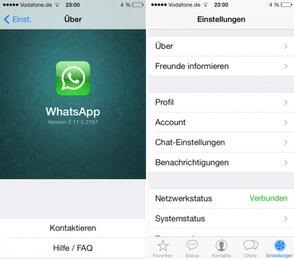 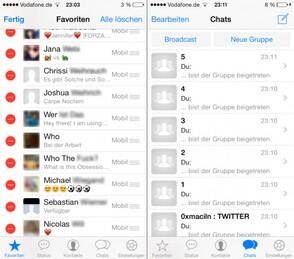 We’re certainly impressed by the changes made to the WhatsApp app, but what do you think? Share your thoughts with us below!