The newly-released iPhone 5s comes in three distinct colors – a first for the Cupertino company – one of which has been dubbed as the “Gold” iPhone. The champagne colored device does closely resemble a shade of the precious metal, but calling it “Gold” seems to have ticked off some people in Taiwan. Hence, HTC has come up with their own version of a gold HTC One – not just in color, but actually 18-carat gold used for coating the device.

The leaked images of the device suggest a few interesting things. For one, the device carries the logo “MOBO” on the backside, subscripted by the figure 18 indicate the quality of gold used. The MOBO reference applies to the European urban music MOBO Awards, which is celebrating its 18th anniversary this month, and which HTC is commemorating with the release of this unique HTC One. 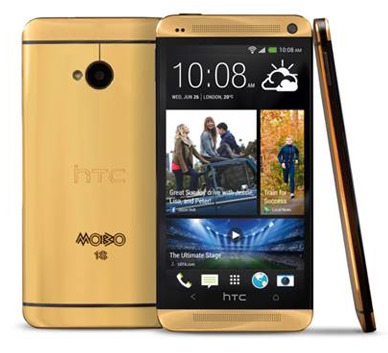 Dubbed HTC’s gold One, the device has deeper ties to MOBO awards than just bearing the logo on the back. There are only five units that have been produced, so forget seeing it on the consumer market. Gold One has brought to light in conjunction with Goldgenie, and out of the five units produced, one will presented as a prize to whoever wins the Best Newcomer category in this month’s MOBO awards. Still not much impressed? The device is valued at $4,400, and is the most expensive one that the Taiwanese manufacturer has created to date. That, combined with the exclusivity of only five units existing in the world, makes it prestigious enough, don’t you think? 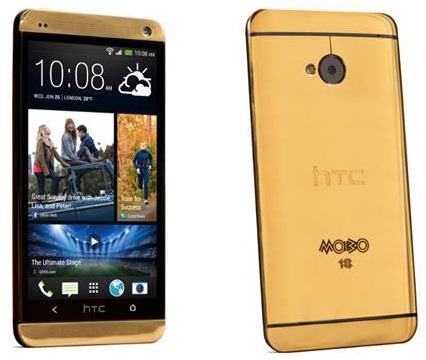 If it wasn’t obvious already, it’s worth noting that the gold One doesn’t really have any difference from the normal HTC One available on the market today. That is, of course, excluding the 18-carat outer sheet that makes it unique. The innards – both software and hardware – are completely the same, so unless you really covet the shiny expensive hardware and the exclusivity, there’s nothing you’re missing out on.

Devices made of gold have always existed, and those that have been considered a sign of exclusivity and simply “ bought it because I can buy it”. It might be a first for HTC to jump onto this bandwagon, but manufacturers like Nokia had done with their 88xx lineup long before it was cool. How effective would that be now for HTC, remains to be seen. Still, it’s a pretty cool move.