Oculus had already caused a storm in the start-up community having generated a strong following on Kickstarter, but it was the acquisition earlier on this week by Facebook for $2 billion that really thrust the virtual reality gadgeteer into the spotlight. With a current emphasis on gaming, Mark Zuckerberg made it clear that he has big plans to integrate Oculus’ VR technology across the wider digital spectrum, revolutionizing the way we communicate and interact with the world around us. Today, a neat concept by  Chaotic Moon has thrown up an interesting idea, showing a user navigating through a virtual shopping mall using a VR headset, and giving an early insight into just how Zuck and co. might eventually utilize Oculus.

The user sees a product he likes on his Facebook page, clicks on it, and is met with a prompt asking him whether he has Oculus. After mounting the VR face computer, he’s led through a virtual mall, onto a store that sells the particular item he was looking for. From there, the virtual reality headset element really kicks in, allowing him to ‘pick up’ and ‘hold’ the product, while also using traditional, Web-like menus to change the specific configurations. 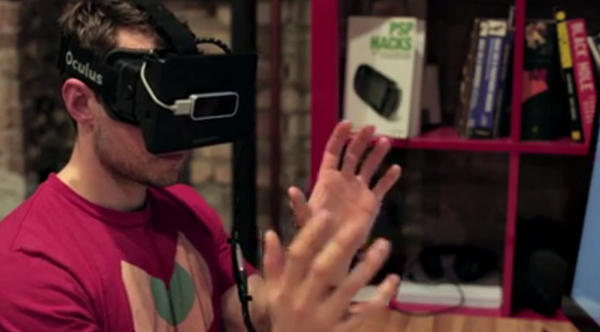 Through video chat, he is then able to confer with another individual, and they collectively arrive at a decision regarding which color to pick. Within seconds, the user has made the purchase, selected an appropriate delivery, and inside one minute, has completed a virtual shopping trip.

It’s a very interesting approach, and while the high street stores have suffered as a result of the online invasion, this kind of technology clearly takes things to the next level.

Mark Zuckerberg has stated his intention to take Oculus far beyond the confines of gaming, and considering the seemingly endless possibilities, the $2 billion up-front fee already appears a shrewd bit of business.

The Oculus Rift will retail later on this year, and will afford Facebook its first opportunity to test the consumer response to virtual reality technology. If the fuss surrounding the Kickstarter project is anything to go by, products like Oculus could well take the market by storm, and if this video is a taster of things to come, we’re looking at a potential game-changer on an unprecedented scale.