Watch YouTube In Picture-In-Picture (PiP) Mode On iPad In iOS 9, Here’s How

The large screen of the iPad makes it perfect for apps like YouTube, but there always seemed to be one thing missing; a Picture-in-Picture (PiP) feature. The introduction of iOS 9 finally answered those calls by allowing third-party video streaming apps to continue playing content in a Picture-in-Picture mode system-wide anywhere on iOS. Unfortunately, even though iOS 9 has been public for quite a while, official YouTube app still doesn’t support Apple’s PiP feature in iOS 9.

If you’re a regular consumer of YouTube content on one of Apple’s iOS devices then you’ll know that the video streaming service already offers an internal Picture-in-Picture type experience. Users are able to minimize a playing video to a small box in the bottom right corner of the app while browsing additional content within the application. However, if you exit the app the video stops as per the current limitations. While we wait for YouTube to actually implement iOS 9’s PiP feature, there is a small workaround that can be used, and it involves utilizing a Safari-based web app. 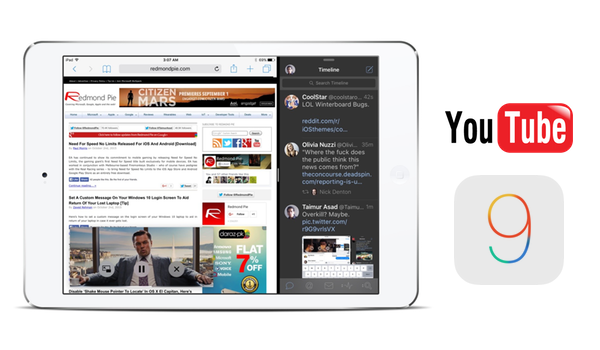 The nifty little service that allows Picture in Picture mode to be possible is called YouTube PIP. It’s essentially a web app that takes a URL of the YouTube video in question, plays it in an embedded native media player which allows PiP mode.

Step 1: Open up your required video in the YouTube app on the iPad. Tap the Share button and select Copy Link.

Step 2: Now that you have the link of the video copied to the iPad clipboard, it’s time to head on over to Safari. Launch the browser and navigate to the YouTube P.I.P. (ctrlq.org/youtube/pip/) website.

Step 3: In the text field on that website, paste the link of the YouTube video that you’ve just copied and tap Go.

Step 4: The web app will then find the video and display it in an embedded native video player in the center of the page. You can play the video directly from this player. Once you begin playing, the controls on the bottom will show a number of icons, including a Picture-in-Picture one. Tap that. 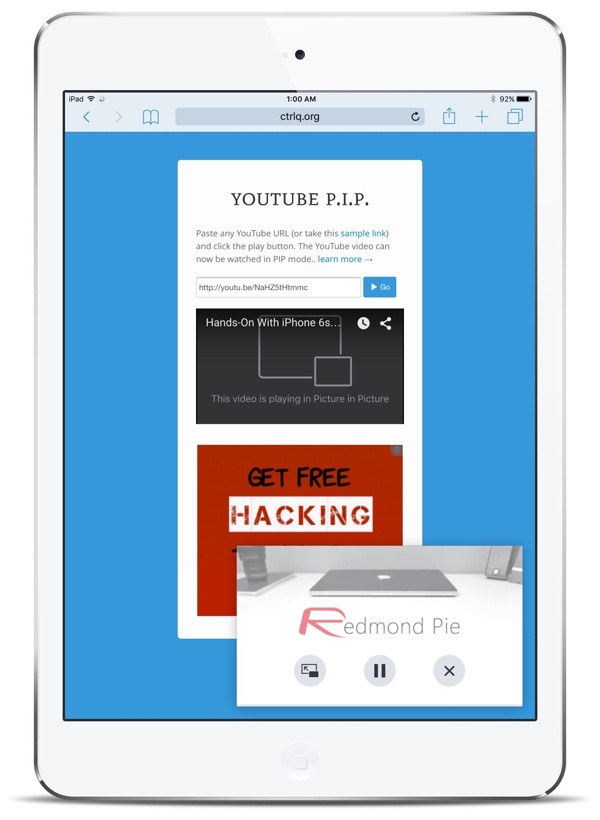 This will force the video into a small Picture-in-Picture container allowing you to then launch any application you wish with the video still playing.

Granted, the whole process isn’t as streamlined and simple as we would hope considering iOS 9 effectively gives developers this level of functionality for apps for free. But until Google sees fit to update YouTube with iOS 9 PiP natively, this is the next best thing.