Watch: Siri Gets Slammed By The Simpsons [VIDEO]

Apple’s hardware is undoubtedly one of the defining characteristics of iOS devices, but it’s the underlying power of Apple’s proprietary software that really makes the difference. With that said, there are still certain parts of iOS that users don’t seem to want to embrace – and it seems the makers of The Simpsons are keen to exploit that.

A recent poll of US based iOS users has shown that a staggering 83% of those questioned had never even attempted to use Siri on their iOS 7 powered hardware. And for those who actually responded positively to the poll also went on record as stating that they believe Apple has placed too much advertising and marketing emphasis on the capabilities of the digital assistant. In short, it seems that majority of the public either doesn’t use Siri or just don’t think it’s ready to be advertised as a main selling point of iOS. It also seems that Matt Groening and Fox Broadcasting also share the same opinion. 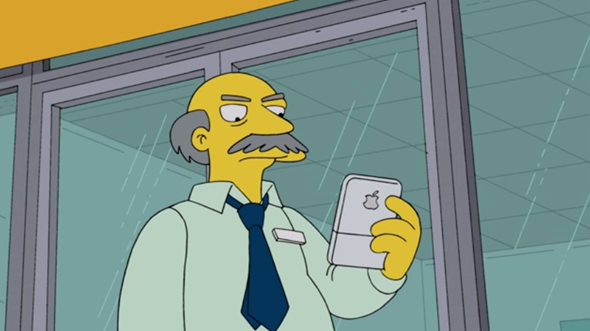 The writers and producing team of The Simpsons certainly aren’t shy when it comes to tackling the popular current trends, as we’ve seen in the past. The 25-minute animated show is generally packed to the rafters with references to whatever is currently going on in the world when that particular show is in production. We’ve already seen Homer and his misfit family come head-to-head with “Mapple” and “Steve Mobbs” in an episode that saw Lisa overspending on her brand new “MyPod” device. Attention has once again been turned to Apple in this Sunday’s episode, but this time it’s the Siri digital assistant that is feeling the brute force of animated anger.

Siri is being asked a simple question only to respond with an inadequate answer that results in the assistant deleting all contacts from the iPhone in question. The ‘animated’ iPhone in question, not a real one, in case you’re wondering. Granted, Siri and voice recognition in general isn’t really all it could potentially be, but does it really deserve a berating on the world’s most popular and longest-running animated series? Check out the video and make your own mind up on that one.

To wrap things up: do you use Siri? And do you think the digital assistant is somewhat over-advertised by Apple? You know where to leave your thoughts.