Watch: iPhone 6 Plus Gets Run Over By A Car [Video]

Now that Consumer Reports has released its report into whether the iPhone 6 Plus bends too easily or not, we’re all of the desperate hope that the whole Bendgate debacle will die a death as soon as possible. Even if it does though, there’s always someone willing to take something that’s already a little bit crazy and then take it to an extreme that few could imagine.

We’ve already told you about one iPhone being dropped from around 12,000 feet with the aid of wingsuit, but now we have the dubious honor of showing you a video that takes one of Apple’s new smartphones and subjects it to new tortures. Tortures of the BMW kind. 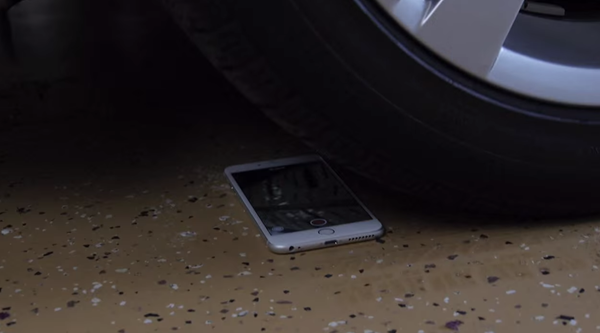 For reasons we can’t quite fathom, YouTube channel TechRax took an iPhone 6 Plus and laid it on the floor before driving over it with a BMW not once, but twice. The result? Well, turns it it stands up to the punishment surprisingly well, actually.

For us, the most interesting thing here is the video recorded by the phone as the wheel comes into view and then inevitably rolls over the lens. It’s all very interesting in a morbid kind of way. We won’t be rushing to recreate the effect ourselves, though!

The Internet furore surrounding Bendgate seems to thankfully be dying down, but this video just goes to show that people will never stop trying to find weird and wonderful ways of breaking their new phone. So long as people are willing to watch the videos though, we’re sure there will be someone willing to make them in the name of ad views.

To each their own, that’s what we say.

To say the least, we don’t recommend doing such a thing a with any gadget at all. And we’ve said this on a numerous occasions that putting on a case on your smartphone or tablet is always a good idea to protect your investment against all sorts of evils lurking around them, and being crushed by a 4-wheeler is one of them. So don’t do such a horrible thing.