Throwing phones to the ground is becoming quite the YouTube hit these days, but few can compete with someone dropping an iPhone from 12,000 feet.

Will it blend? Won’t it blend? Remember when the most odd question about a new iPhone was whether it would blend or not? Now we’ve got people all-but snapping them in half. But oddly, it gets worse. 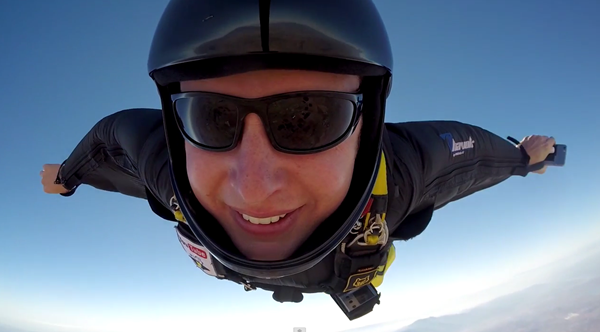 Enter the folks at RatedRR, who have been conducting a range of punishing stress tests on the iPhone 6 Plus. Along with shooting it and drowning it, Apple’s iPhone 6 Plus has now had to contend with one of the strangest drop tests we’ve ever seen.

Believe it or not, this iPhone 6 Plus was dropped from around 12,000 feet via a dude in one of those fancy looking wingsuits. You know, just to see what would happen. The phone was then located in a field thanks to Find my iPhone.

Amazingly, the handset in question largely survived unscathed, though it’s predictably going to need a new screen sooner rather than later. Beyond a crack or two though, the thing was perfectly usable and endured the large drop.

What all this means is absolutely nothing. As has been demonstrated countless times, dropping a smartphone from even the most modest of heights can be disastrous if it lands in the wrong place and at the wrong angle and we won’t be taking this test as any kind of testament as to the new iPhone’s durability. Still, it makes for a cool video at the very least!

Apple’s iPhone 6 Plus is currently embroiled in ‘Bendgate’ and could certainly do with a win. As unlikely a source as it is, we suspect folks at Apple will gladly take this one.

It’s best to use a case on a smartphone whenever possible. We agree with the fact that a case really does spoil the look of your hefty investment, and showing it off in public with said case on becomes somewhat impossible, but hey, it’s protection which will pay its debt in the long run.