With the annual HITBSecConf coming to an end last Friday, the jailbreak community is still reaping the benefits of the Absinthe 2.0 software which the Chronic Dev Team released to the world after their ‘one more thing’ announcement. Although the event itself featured some extremely talented and well known security researchers, it was perhaps the members of the Jailbreak Dream Team that were the celebrities of the event.

The faces that took to the stage to represent Chronic Dev may not be known to everyone, but the names attached to those individuals will definitely be familiar to anyone within the jailbreak community. French iOS researcher Pod2g was joined by team members Pimskeks, P0sixninja, iOPK and legendary developer Planetbeing to walk the audience through the A5 Corona, the main differences between the A4, and how they actually managed to find a way to successfully jailbreak it for the public. 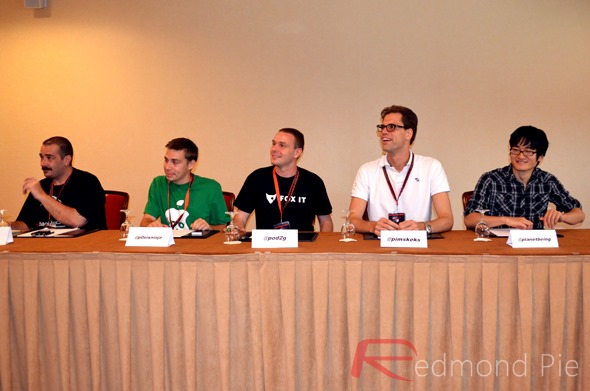 Their attendance at the security conference collectively represented the part of the past, present and most certainly the future of jailbreaking. As part of their presentation, they spoke eloquently about the immediate and long term future of the jailbreaking scene, with Pod2g particularly focusing on where he sees Apple going in the future and the possibilities of allowing unsigned code to run in a similar fashion to how Android-powered devices operate.

With the team consistently being in the public eye via social media outlets such as Twitter, they are unfortunately subjected to a regular barrage of abuse from impatient users who believe they are entitled to receive a jailbreak almost instantly after Apple releases a new firmware. The team discussed how the positive, well natured tweets and blog comments far outweigh the public criticism, making the whole process worthwhile, something that is an extreme positive for the community on the whole.

For those who didn’t follow the conference, or get caught up in the excitement that surrounded it, the ‘one more thing’ bomb-shell was related to the fact that the Dream Team used their presence at the security event to officially introduce the world to the v2.0 release of their one-click Absinthe jailbreak solution. After months of hard work and exploit finding, mixed with weeks of will-they-won’t-they speculation, it turns out that they indeed did introduce us to Absinthe 2.0. Loved for its simplicity, as mentioned, Absinthe 2.0 offers a one-click solution for pretty much all devices capable of running iOS 5.1.1, perfect for beginners and advanced jailbreakers alike.

With Redmond Pie having an official presence at the conference to soak up the atmosphere and spending time with the members of the Jailbreak Dream Team, it was amazing to see how open, honest and welcoming they were to respond to questions about the intricate details of the work they do. To do this kind of work, which requires consistent research and testing, requires dedication and an unyielding passion to the cause, something that all attending members have in abundance.

You can check out the press conference in it’s video glory down below: