This video shows Samsung’s 2017 Galaxy S8 facing off against Apple’s 2015 iPhone 6s in a side-by-side speed and memory management comparison.

Samsung’s Galaxy S8 is without doubt the biggest flagship smartphone on the market right now, and until Apple announces its 2017 iPhones later this year, things are unlikely to change in that regard. Sure, there are other smartphones being announced all the time, but nothing can compete with the likes of Samsung and Apple at the very top of the pile. 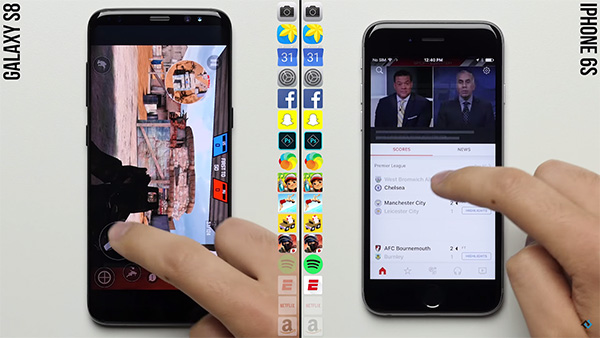 If there was ever anything that made that point clear, it is the fact that the iPhone 6s from year 2015 is still a very, very fast smartphone when compared to the competition despite its age, and while the 2016 iPhone 7 is faster, no competing smartphone has bested it to date, which has to make you wonder, what about the recently released Galaxy S8 from year 2017?

YouTuber PhoneBuff wondered that exact same thing, so he set about doing what he does best. Taking an iPhone 6s and a Galaxy S8, he put both phones through their paces to see whether Samsung’s latest can take the crown from Apple’s almost two year old smartphone.

PhoneBuff follows the tried and tested method of having both phones launch a host of apps to see which gets to the end quickest before doing the same again to see which can re-launch the same apps in order to test the multitasking capabilities of the phones. To start with, the Galaxy S8’s raw power has it in the lead, but that soon changes once games and larger apps start to come into play – something iPhones have historically done well with.

So who comes out on top? Well the title of this post gives it all away but the video is still well worth a watch. It’s only a few minutes long and it tells the full story of just how these two phones stack up against each other. There are much worse ways of spending your time!