As you’ll likely have picked up on over the past few weeks, the iPhone 6 and iPhone 6 Plus launched was somewhat blemished by reports that both handsets – particularly the larger of the two – were unduly prone to bending through normal use. Apple came out fighting, underlining its stringent stress test processes as well as pointing out that only a handful of users of the 10 million early adopters had complained, but despite the apparent mountain being made out of a mole hill, rivals were quick to pile on the misery. Not surprisingly, Samsung was at the forefront of the mockery, but with the Korean outfit about to roll out the Note 4, how does its phablet fare in a bend test carried out by the same group behind the viral iPhone 6 Plus clip?

Unbox Therapy, the folks behind the iPhone 6 Plus Bendgate, have garnered in excess of 50 million views in just a few weeks for that video, and with a Galaxy Note 4 now at Unbox Therapy’s disposal, the temptation to test its bend-ability proved too strong to pass up on. 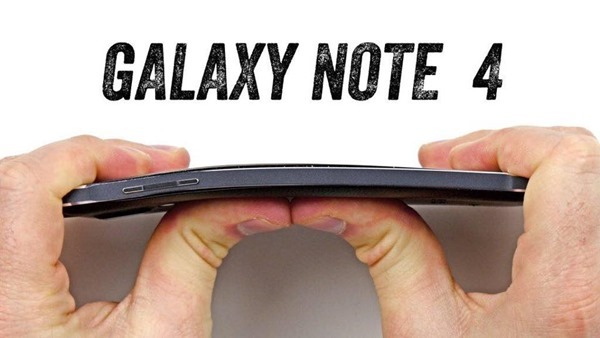 Samsung’s own bend testing appeared to show that the Note 4 does not have a problem in this regard, but like so many company-sanctioned tests filmed for the purpose of marketing, Sammy was only ever going to reflect its prized asset in a positive light. Thus, Unbox Therapy’s bend test gives us a much more rounded view of the latest Note’s rigidity, and as you’ll see in the clip below, it does, in fact, bend.

Not only does it bend, but it stays bent, and doesn’t return back to its original state unless force is applied to bend it back to its original state. Having been berated for build quality over the past few years, Samsung has finally caved in bringing a metallic chassis to the Galaxy Note 4, but while this does offer a more high-end feel to match the premium price point, it does mean that it suffers from problems that don’t ordinarily afflict plastic, such as malleability.

Indeed, while the Note 3 has been shown to automatically return to its shape when bent, the Note 4 does not, and as Unbox Therapy’s Lewis Hilsenteger points out in the test below, any smartphone will bend if enough pressure is applied to it.

Check out the clip below, and do leave your thoughts in the comments.