Having been announced way back in early September at the IFA expo in Berlin, Samsung’s Galaxy Note 4 is finally headed to market. A minor launch has already taken place in the company’s native Korea, with the small inventory having quickly sold out, but with the mass roll-out now just days away for many countries including the United States, the Tizen OS maker is once again on the campaign trail. As a precursor to the presumably large promotion push that Samsung will commence as it dips into its sizeable marketing budget, the company has released a drop test video, seeking to show prospective buyers that the device is as tough as it is feature-rich.

In the drop tests that we’re accustomed to seeing on YouTube, a device tends to fall from different heights and land on a variety of surfaces. Samsung essentially replicates these tests with a slightly more controlled approach, using automated machinery to showcase the durability and reliability of the Galaxy Note 4. 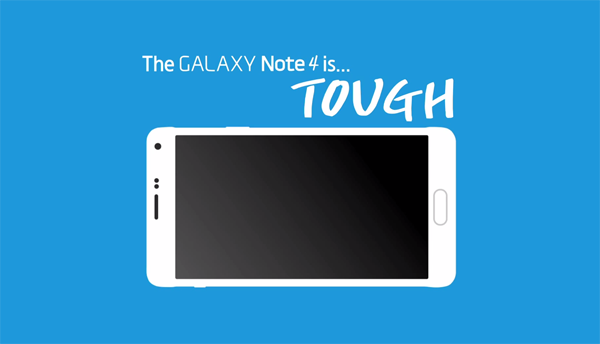 After the Bendgate “scandal,” in which there was a suspicion that Apple’s iPhone 6 and 6 Plus were susceptible to bending, Samsung knows that there will remain quite a few fence-sitters unsure of whether to grab the Note 4 or the new, enlarged smartphone offering from Apple. There’s little argument that, by delaying the release, Sammy has already conceded a number would-be Note 4 owners to Apple and iOS, but if the company can capitalize on the lingering doubt with regard to the rigidity of the iPhone’s aluminum shell, then those still undecided may fall into Samsung’s grateful arms.

As well as drop testing the Galaxy Note 4 against a ceramic coffee cup – a tad pointless given that there aren’t many items that wouldn’t score favorably against this particularly fragile piece of crockery – Samsung goes on to machine-drop the device from a series of heights, a procedure apparently repeated “hundreds” of times.

As you’d expect from a company-made drop test, the Galaxy Note 4 passes without so much as a blemish, and aside from nearly losing its S Pen at one point, is continually shown to be in perfect working order.

Does the Note 4’s apparent rugged nature incline you to make the purchase? Check the video below and be sure to leave your comments via the usual channels.