All the rumors leading up to WWDC 2016 were that Apple would announce a new MacBook Pro with a capacitive OLED touch panel that would allow Apple to replace the top row of the keyboards that currently ship as part of the notebooks. That didn’t materialize, though the smart money is still very much on that particular addition making its way to the next refresh of the MacBook line. All of the talk about screens on keyboards has some people wondering, though – what about a screen built into Apple’s Magic Keyboard?

In fact, that’s the precise thing that the folks at CURVED had in mind when designing a concept video showing off, you guessed it, an Apple Magic Keyboard with a built-in touch-based display along the top, and oh my, does this thing look stunning! 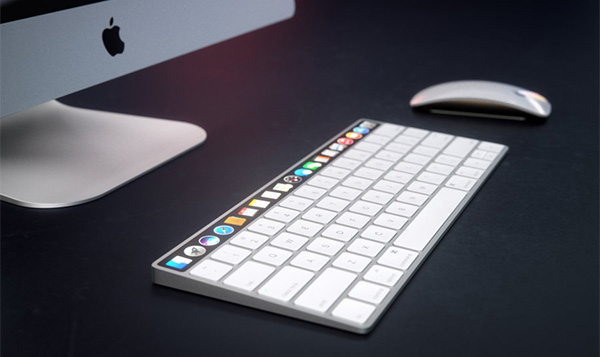 While the screen is expected to replace the Fn keys at the top of current keyboards, simply thinking of this as a replacement for those keys is somewhat missing the point of why this could be so amazing. As CURVED points out, the whole screen could display media playback controls in graphical form, mimicking the Control Center controls found within iOS.

The trick: Since the display is touch sensitive, its visual appearance would be customizable – with either individually adaptable favourite keys or specifically assigned keys for apps. The OLED touch panel could for instance show YouTube’s progress bar or add play buttons specifically for Spotify. The beauty of a Magic Keyboard with such technology is that it could be used with any Mac, or indeed iPhone or iPad. We love the idea of a customizable touchscreen at the top of our keyboards, so come on Apple, make it happen. Oh, and allow developers to change how the display looks and acts too, please.