This past week Apple announced iOS 10 and made the first beta release available to developers, with public beta testers set to be able to download a version of the software sometime next month. If you can’t wait for that, though, we have plenty of iOS 10 coverage for you to feast upon, including a host of videos like the ones embedded below, which pits first beta of iOS 10 against iOS 9.3.2.

Depicted across no less than four different videos, iAppleBytes took the first beta release of iOS 10 and installed it on an iPhone 5, iPhone 5s, iPhone 6 and iPhone 6s before putting the phones through their paces. All of those phones were also tested with a stock release of iOS 9.3.2 in order to give some basis for comparison. 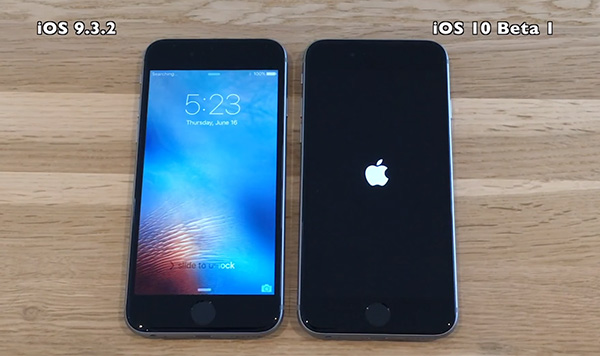 With new features the order of the day for iOS 10 rather than performance enhancements, Apple’s focus may be in a different place to where these tests look. Couple that with the fact that this is a beta and, of course, will very likely not be indicative of what the final shipping software will be capable of in both features and performance, and it’s arguable that these tests are perhaps less than fair on Apple.

Still, all’s fair in love and benchmarking, and everyone loves a spot of YouTube video fun every now and then, so sit back and check out all of the videos, or if you prefer, just watch whichever corresponds to the hardware that you own.

We’re not going to spoil the videos for you, but remember, betas are just that and shouldn’t be installed on your main smartphone. Unless you’re me, in which case you can completely ignore your own sound advice. Whoops.