In previous posts, we’ve regularly talked about the good old days of jailbreaking when all you had to do was click a button and you were provided with an entirely untethered, easily manageable jailbroken device capable of accessing Cydia and installing all of the goodness from within.

We’ve also talked about how those days appear to be long gone, with a semi-tethered IPA-based solutions seeming to be the best developers could do. Until now, that is. If a series of tweets are to believed, then it looks as though a solution could potentially be on the way to turn the semi-tethered yalu102 jailbreak into a fully untethered one. 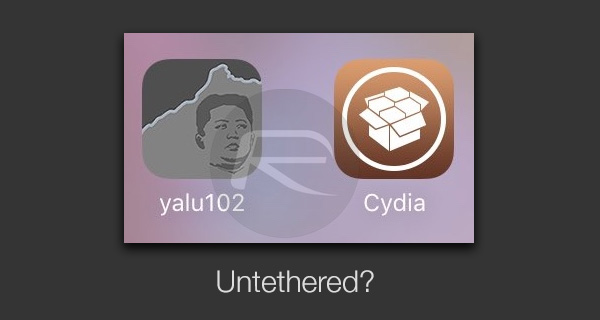 First and foremost, the word to take into account here is most definitely the use of potentially. The claims have come from a developer named Lang Shi, who joined Twitter back in August of last year with the tagline “I stockpile 0days and sometimes break thingz.”

The series of tweets in question started approximately 20-hours ago, with Lang Shi suggesting that he had found 2 new “kernel UAF bugs in iOS 10.3b7.” that put the tone of the Twitter account onto iOS, with a follow-up tweet relating specifically to this mysterious untether tool:

Btw my “untetherer” tool for iOS 10.x is almost ready, turn your semi-tethered Yalu into fully untethered with 1 tap!

And that is where the excitement has kicked in for members of the jailbreak community who have managed to see the tweet. The post was accompanied by two images; one showing a familiar looking white screen with an explanation of what the tool will actually do by utilizing two kernel exploits, as well as a “go for it” button. The second screen is almost identical, but shows the text “untether installed” in place of the call to action. 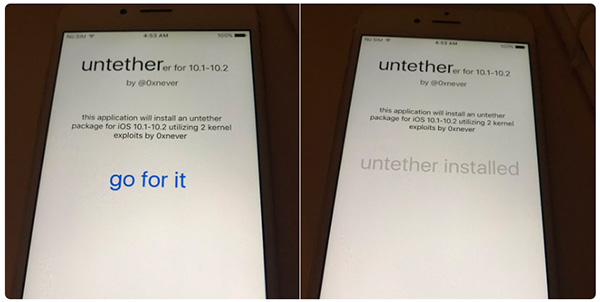 There’s even a follow-up tweet to suggest that one of the kernel exploits used is still present in the latest beta of iOS 10.3. Oh and it’s also suggested to work for iPhone 7 users on iOS 10.1 jailbroken using the mach_portal tool.

It all sounds very exciting, but it also needs to be taken entirely with a pinch of salt at the moment. The provided evidence – which is basically two screenshots with some text on – is encouraging, but hardly convincing at this stage, meaning that we won’t really know if this is legit until it’s released. If it ever is.

Still, let’s lean toward the side of optimism and hope that it’s the real deal.

Update x1: Unfortunately, this has now been confirmed as fake.