Uber has just launched its first-ever food delivery service in New York and Chicago. The company that literally pioneered the mobile app based transportation network is inching closer to breaking into the food delivery market with UberEATS.

Uber had run a pilot program earlier in the cities of Los Angeles and Barcelona, and has now officially launched the service in the two new busy cities as well. Uber will not be launching a new app for this just-launched service and instead will be relying on the existent Uber app. Apparently, the food option will show up automatically and will only be available when a consumer is in the coverage area.

Through UberEATS, users in New York, Chicago, LA, and Barcelona will be able to order dishes “from the most popular, iconic restaurants delivered within minutes.” Uber is keeping this service interesting and has stated in its blog post that food will not be delivered to your door, because that’s too mainstream. “UberEATS is just like uberX — instead of picking up a customer, we deliver their lunch or dinner.” Uber highlights the process of ordering your food saying, “Select number of meals, tap PLACE ORDER, and your driver will be curbside in minutes.” 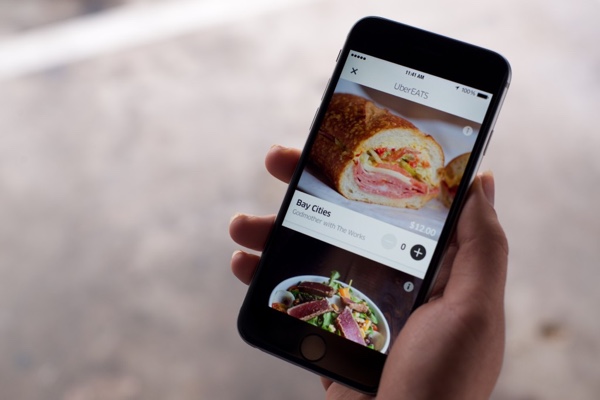 UberEATS will have its own dedicated pool of drivers. And regarding lunch options, they will range from $9 to $12, while users will be looking at $10 to $15 for dinner. Of course the service will not be free of charge and Uber is likely to punch a $3 delivery fee in all covered cities except for New York, where delivery fee will cost you $4. Of course the delivery fee is a standardized rate, regardless of the number of orders you place.

Uber has said that it will also be looking to introduce and shuffle menus on a daily basis to bring the local flavors for users of different taste. Uber is confident that this new service will be a huge success and is excited for its future given that the response in LA for UberEATS had been “amazingly positive”.