Two Minutes Late For Your Uber Ride? You May Get Charged

If you’re a regular Uber user, but know deep down that you suffer from punctuality issues and are often late for your appointments, then you may want to start thinking about self-improvement. At least where your booked Uber journeys are concerned. Historically speaking, everyone booking an Uber ride through the mobile app would get a period of five minutes to enter the vehicle after it had arrived at the pick-up point. No entry within that five minute period meant that the driver could make his way onto his next pick-up, but still levy a charge against the no-show account. Shockingly, it now looks as though that Uber is looking to start charging you right after two minutes of wait as part of a trial in certain locations.

The new scheme essentially means that riders will almost literally need to be on the doorstep of the pick-up location at the very time that they actually request the Uber through the app. While the no-show time remains the same 5 minutes, two minutes later if you haven’t stepped into the car, the driver will start charging you against your account.

The latest discovery has come to light thanks to a screenshot shared into the public domain via Twitter. It shows a new pop-up in the Uber app under the title “Request When You’re Ready”. 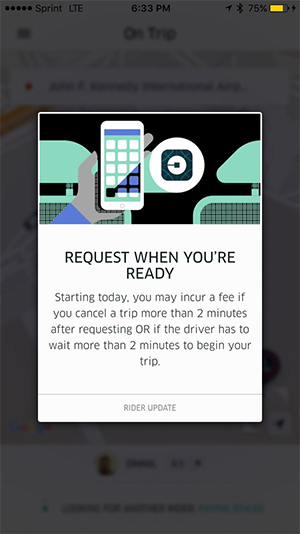 Uber seems to be running a pilot program for this purpose which is currently taking place in New York City, Dallas, Phoenix, and New Jersey, with the company stating that they will be looking to evaluate the results before any formal decision is made to introduce this type of penalty globally. The transportation start-up has provided a little additional clarity on what charges are actually on the table as part of the new program.

Uber says users will only be hit with a no-show fee if they don’t show up within 5 minutes of their driver arriving. But after 2 minutes of waiting, the rider will start to be charged the per minute rate for their city which will be added to their ride cost if they do get in. Drivers also incur no formal penalty for ditching passengers at any time before they get in the car.

It’s entirely understandable that Uber values the time of drivers, and therefore is looking to increase efficiency by ensuring that cars don’t remain stagnant for as long as possible, but the problem here is that Uber was looking to differentiate itself from standard cab rides by offering things like an extended wait time, as well of course as ease of use and convenience. We’ll have to wait and see what happens after Uber “evaluates” the data, but we can’t see consumers being too happy about the change.