It was noted from the beginning by the skeptics that the iPad was merely a big iPhone which didn’t really bring anything new to the table. What with the iPad tablet series coming with 3G technology (if you can afford it), it was surely only a matter of time before the creative minds tried to turn it into quite literally a big iPhone. 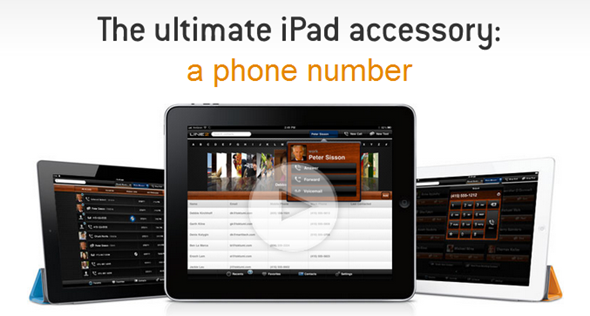 Despite a few attempts which didn’t quite make the expected waves such as TruPhone, that time appears to have come with a soon-to-be-released app, which turns your iPad into an all-singing, all-dancing communications device. The aptly named ‘Line2’ app has a tidy interface and costs just $10 a month but you can try it out for a week at no cost. It’s coming out on 28th July and will enable you to make calls via built in speaker and mic or a wired headset, as well as send SMS and listen to voicemail. The app, which works on both 3G and WiFi, utilizes VoIP, and subscribers will get unlimited calls and texts nationwide and allows you to port a preexisting number or create a new one.

Here is a teaser video of Line2 in full flow:

It’s a nice-looking app on the face of it, and the ambient music does well to make it seem like a flawless app. But, The Hulk aside, I cannot really see a huge market for such technology. It could potentially be of good value if a future iPod Touch with 3G was to be released. But until then, an image of people walking down the street talking into a tablet-sized device seems ridiculous and unlikely. Some argue that it would benefit those who have poor eyesight, but the iPhone already has solid features which cater to those who are hard of vision. What do you think? Would you find it in any way useful?

To wrap it all up, there’s also another way of making phone calls from your 3G iPad, but this method of course requires you to be jaibroken, it’s a nifty tweak called PhoneIt-iPad. The best thing about this jailbreak tweak? Well, you just pay $19.99 up front for calls over 3G, but keep in mind that it will use up your minutes or credit, depending on the type of plan you have.

Check out our iPad Apps Gallery to explore more apps for your iPad.