PhoneIt-iPad: The App Which Enables You To Make Calls And Send SMS From Your 3G iPad Is Now Available For Download

Just last month, we reported on PhoneItiPad, an iPad tweak that lets 3G-capable iPads take full advantage of a connection to a cell network, allowing users to make and receive phone calls, as well as send and receive SMS. A few weeks later, the tweak is finally available to the general public, for $19.99. 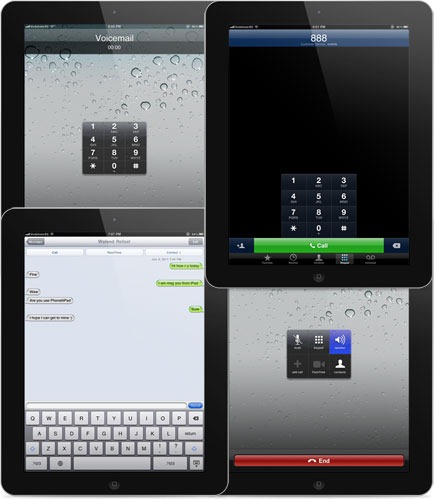 Here’s how to set it up:

Step 1: Locate your Serial Number, which you should be able to find under System > General > About. This is your unique mobile identifier, which you’ll later need to set up PhoneItiPad.

Step 2: Purchase PhoneItiPad by clicking on this link (you can do this from computer). Insert your Serial Number when requested.

Step 3: Fire up Cydia and add the following repository: http://apps.iphoneislam.com. Then locate the "PhoneItiPad" and install it.

Step 4: From here, the tweak should work directly, and you should be able to make calls and send SMS messages, as showcased on the original video released by iPhoneIslam:

You should think twice before giving out your unique Serial Number to a third-party, but that seems to be a requirement to be able to make calls on the iPad. If the video above is to be believed, this hack works very effectively and is well worth the $19.99.

This tweak was developed by iPhoneIslam, which has developed FaceIt3GS, a software patch that allows iPhone 3GS users to use FaceTime, which is legally restricted to iPhone 4, iPad 2 and iPod touch 4G users.

It’s important to note that this tweak will not work with iOS 5 yet, and will require you to jailbreak your iOS 4.x.x device first. since, just like any OS modification, it’s not approved by Apple. It’s recommended that you have basic skills on how to restore your device, in case something goes wrong.

Will this lead people to carry around iPads in their briefcases instead of iPhones in their pockets? Probably not, but it’s a proof of concept of how capable an 3G-capable iPad 2 is to interact with the outside world.

(thanks to Eyad Al-Kharashi for sending this in!)