The iPhoneIslam team, which has previously authored FaceIt3GS, has come up with a new hack which will blow your mind: full calling and SMS support on the 3G iPad. 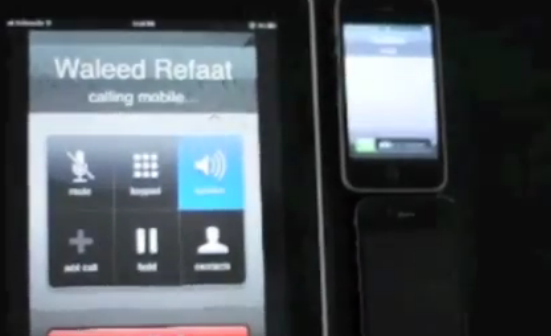 iPad 3G, by default, allow internet connection and other services via 3G, but not calls or SMS. That’s quite a letdown, since the device has the capability to send calls. Of course you could get Skype, but good luck getting everyone in your list to get a Skype ID.

Thankfully, those days seem to be over. On a blurry video posted on YouTube, an iPhone jailbreak tweak will soon unlock calling and SMS capabilities on your iPad. Watch the demo:

According to the authors, this hack will require nothing but a jailbroken iPad:

A hack that will change the game. Can you imagine turn your iPad to a fully functional phone.

WIth No Special Hardware all what you need is Jailbroken iPad 3G and your iPad 3G will do anything you expect from iPhone… Phone Calls, SMS, FaceTime by Phone Number… ETC

Of course it’s hard to believe anything you see out there, especially on YouTube, but the team behind this already has a track record of providing high-quality mods in the past. Last year, they released FaceIt3GS, which enabled FaceTime on older iPhone 3GS devices.

There’s no release date for this tweak as of yet, but according to iPhoneIslam, it will be available on Cydia "very soon". You’ll just have to keep your eyes peeled, or just keep checking back here. We’ll let you know once it’s out!

It’s hard to understand why Apple left this feature out in the first place, since the hardware if fully capable. The only explanation I can think of would be a weird agreement with the carriers.