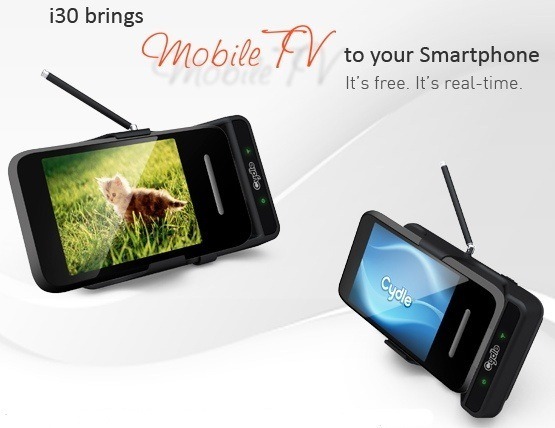 Nowadays, most US customers pay for a cable subscription in order to watch TV, but the truth is that service was freely available over the air throughout most of its history. The Cydle i30, as the product is called, aims to bring TV back to its roots, giving you access to content for free, without a subscription, and more importantly, without putting a strain on your phone bill, since it doesn’t require any data downloads.

However, as you might expect, over-the-air TV is also limited. While you can indeed get TV signal without a subscription, you can forget popular cable channels like Comedy Central or Discovery. Only basic channels are broadcast over the air, such as NBC, Fox and PBS, local channels and an independent channel or two. Offering also depends on your area and your ability to get clean  reception: while in large cities like Washington, DC you might be able to have quite a large offering, that might not be true in rural areas.

Of course, there are no recording or on-demand capabilities available: you get to watch what’s on, just like the good old days.

There are other (and more elaborate) ways to get a broader offering on your iOS device. Comcast offers a free XFINITY TV App to its customers, which lets you check TV listings and watch on-demand shows and movies right on your phone. It also lets you set your DVR to record programming, right from your iDevice. If you’re not a Comcast customer, you can also get the Hulu Plus App, which allows you to watch several shows for a $7.99 per month subscription fee.

Cydle has developed quite a few devices in the past, like GPS navigation devices. They also offer the P29H, an Android-based multimedia player, with a radio receiver and basic music and movie player, as well as a picture viewer.

If you’re planning to watch the latest episode of Dexter using this method, you’ll be out of luck, but for watching live news without paying any connection or subscription fees, this might be the best choice.

There’s still no word on when the product will be available, other than it’s "Coming Soon", according to the i3o’s product page.