Has anyone mistaken your Apple Watch for a Casio Calculator Watch? Chances are, it’s the old-timers who may make that mistake given how a calculator on the wrist was a huge tech advancement and carried that cool factor almost two decades back. You know what they say, if you can’t beat ’em, join ’em. Enter – Geek Watch, the app which transforms your Apple Watch into a Casio-styled Calculator Watch.

Now when we say ‘Casio-styled,’ the design and the looks are identical to the now $20 Calculator Watches that can be bought on Amazon, eBay and the like. However, the developers have cheekily changed the branding on the face of the interface to “Geekio” for obvious legal and copyright issues that would arise had the creators used the Japanese company’s brand, though they did stick to the font and style used by Casio. 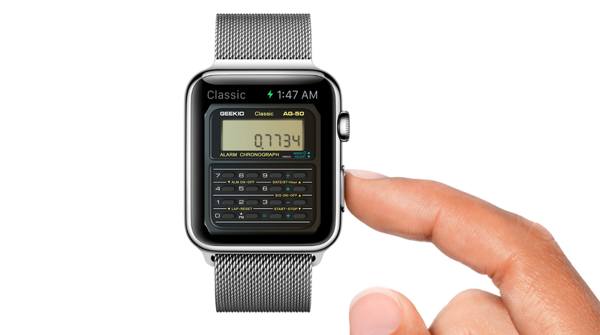 The app carries a bunch of treats that can be unlocked using your super-nerdy watch skills from the past. There are about 9 Casio-styled faces in the app, but apparently most of these are only available as in-app purchases and you have to wonder if it’s all worth it given how the app still has to work out its display issues on Apple’s first wearable.

With Apple not supporting custom watch faces from third-parties for the Apple Watch for now, users of Geek Watch will come across some gaps and borders around the edges as the watch face does not take over the entire screen.

Geek Watch also carries a retro-styled stopwatch and tinkering around with it will also unlock a few items as well. Speaking of unlocking items, typing upside down to spell words will also be considered proof of your nerd powers and thus you will be rewarded in the nerdiest of ways. 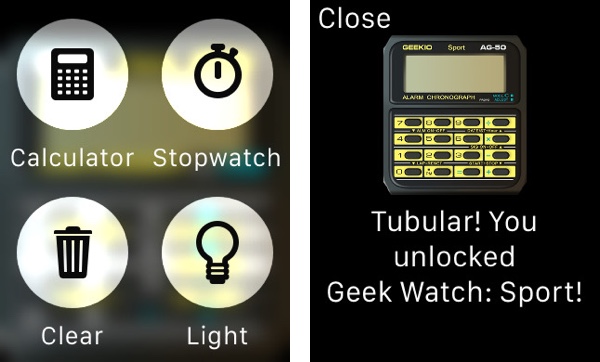 Geek Watch costs $0.99 on the App Store, and you would truly have to be a classic fan to pay for a look that would cost you even more if you want to further shuffle through different Casio Calculator Watches.

Take it for a spin, and let us know what you think about it.

(Download: Geek Watch for iOS on the App Store)