I would imagine that being the CEO of Apple would be one of the most challenging but also most rewarding job in the technology industry at the moment. The company is enjoying such a tremendous run of success with their mobile and Mac products and have seen their stock price soar in recent weeks, but that doesn’t mean that the position of CEO doesn’t come with its fair share of stress. After being in the position full-time for the last seven months, it seems that Tim Cook is settling in rather nicely if the latest employee opinion polls are anything to go by. Cook has been in charge of Apple since October 2011, taking over the reigns from Steve Jobs after his tragic passing and although he hasn’t really contended with any major incidents yet, it seems that his employees rate him very highly, higher than they rated his predecessor in fact. According to Glassdoor, a site that provides employer and salary reviews, Tim Cook has a staggering 97% approval rating from his employees which just shows how much faith they have in him. The same site showed that Steve Jobs had a 95% approval rating this time last year, putting Cook ahead of him by a small but significant 2%. 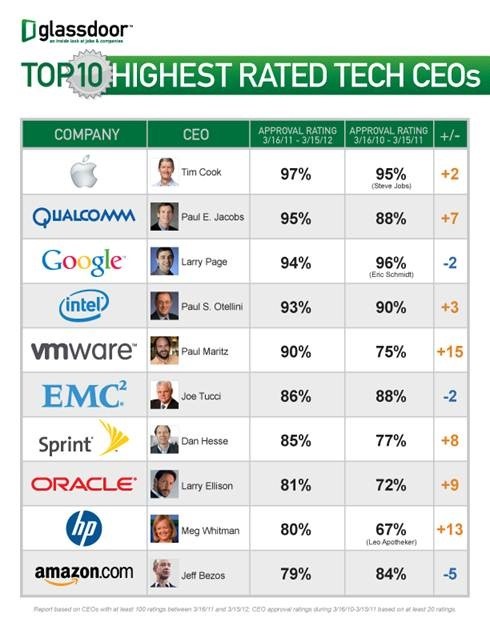 To have a 97% approval rating from your employees is impressive enough, but it doesn’t end there. Cook actually finds himself sitting at the top of the list looking down from his pedestal at the likes of Paul E. jacobs (Qualcomm), Larry Page (Google) and Dan Hesse (Sprint), amongst others. Apple’s CEO is currently rated as the most approved CEO in the world amongst tech companies. Sitting at the top of such an illustrious list of top bosses can only be a good sign for Cook as he takes Apple into a new era under his stewardship.

Many industry experts believed that it would be an extremely difficult task for Cook to take over from the much adored Steve Jobs, especially considering many think of Jobs as being Apple due to his love affair with the company. However, it would see that Cook is enjoying a relatively seamless take over, with one of his employees commenting “I think leadership is doing an amazing job. We have the best management team anywhere”.