Telecommunications company Orange has developed a T-shirt that, get this, can charge your iPhone. 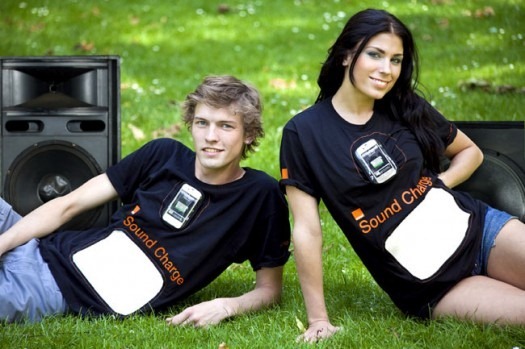 The shirts aren’t very pretty to look at, but hey, it’s the technology that’s interesting!

The T-shirt is called Orange Sound Charge and it is currently a working prototype. The way the shirt works is, perhaps, even more amazing than the idea itself: Orange’s shirt works by converting sound energy into electrical energy.

Sound Charge makes use of sound pressure waves and converts them into electrical charge which, in turn, is used to charge your iPhone. The shirt will soon be able to charge a variety of mobile devices as well. 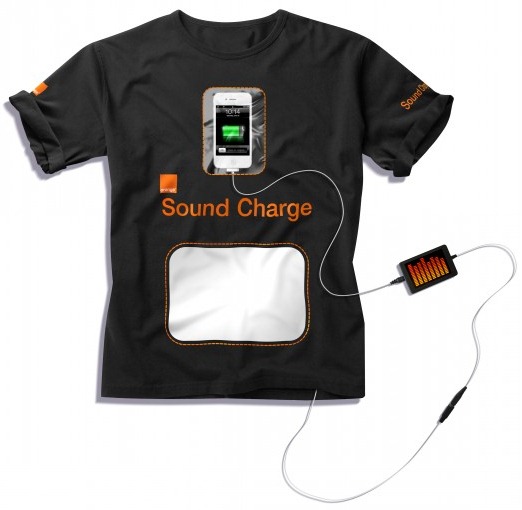 Orange’s post announcing the shirt explains how it works:

The eco charging device uses an existing technology in a revolutionary way; by reversing the use of a product called Piezoelectric film, allowing people to charge their mobile phones whilst enjoying their favorite headline act at Glastonbury.

Usually found in modern hi-fi speakers, an A4 panel of the modified film is housed inside a t-shirt which then acts much like an oversized microphone by ‘absorbing’ invisible sound pressure waves. These sound waves are converted via the compression of interlaced quartz crystals into an electrical charge, which is fed into an integral reservoir battery that in turn charges most makes and models of mobile phone. As the ‘device’ is worn, a steady charge is able to be dispensed into the phone via a simple interchangeable lead which fits most handsets.

To charge the iPhone, you’ll need to a. wear the shirt, duh b. be located at a place where there is sufficient ambient noise level.

Condition A is definitely pretty easy to conform to as long as you’re willing to wear a shirt which prominently shows your iPhone and has a big white patch.

The shirt will be tested at this year’s Glastonbury Festival’s series of live concerts where, of course, there’ll be lots of loud music to charge a mobile device.

Watch the video below to see the shirt in action: