This is the New and Sexy Internet Explorer 9 [Screenshot]

Mary Jo Foley of All About Microsoft has managed to grab a screenshot of Internet Explorer 9 which was accidently posted up on a Russian site. Even though the screenshot and info has now been pulled from that Russian site, but Mary Jo has got all the details for us, courtesy of Bing Translator.

The Microsoft Russia site said there will be a new, simplified navigation bar with IE 9 that will leave “more room for the (Web) site itself.” There will be some navigation tools for commonly used functions — things like a back button and a combined address/search bar. But the numerous menu items in older versions of IE have “been consolidated into one,” the site said. “Now the user sees only what you need to navigate.”

The Russian Microsoft site said that there will be provisions for “recognized,” or “protected,” sites which will allow users to go straight from the Windows taskbar to these sites without having to open IE first. In other words, recognized, protected sites will be treated more like traditional Windows applications.

Bing translated the instructions for doing this as “(C)lick the pins in the address bar or click the site in a new tab and drag it to the taskbar. That’s all. If the site is pinned, it displays an icon that is separate from the Internet Explorer. Now from the website you are just one click.”

(It sounds like this might be a feature accessible by Windows 7 users only, though I am not sure.)

The Russian site also mentioned “tear-off tabs” — a capability that will build on Windows’s Aero Snap feature. Snap allows users to more easily look at two pages, side-by-side by “snapping” them to the sides of their PC screen. Firefox and Safari both already include tear-off tabs, allowing users to select tabbed items and turn them into separate windows.

Here’s the description of the tear-off tabs from the Russian site, as translated by Bing:

“Often a task must open several Web pages or screens. Advanced tabs in combination with Windows Aero Snap is a quick way to display two or two-page spread. To do this, simply drag the page in different screen and will appear next to each other. Reproduction of content sites and video are not violated.”

For those of you who don’t know, Internet Explorer 9 (IE 9) has come a long way since its predecessor IE8. It takes the experience to a whole new level with all the graphics rendering taking place on the GPU level for HTML5 via the Microsoft DirectX technology. IE 9 has been re-written from the ground up and it takes advantage of the GPU power for all page rendering, and further enables web developers to exploit this power in ways they already understand (CSS, DHTML, JavaScript). 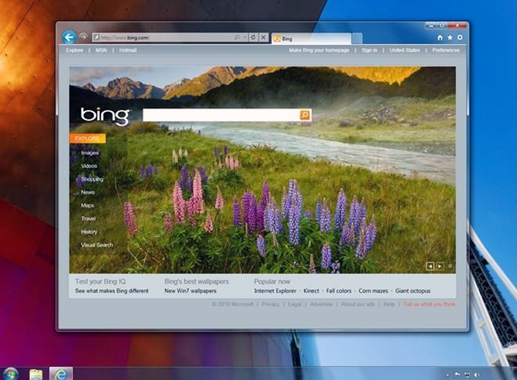 Microsoft has so far delivered four Platform Preview builds of IE 9 for developers. Beta version of IE9 will be released on September 15th.