We’re getting to that time of year where graphic artists start to try and guess what the next iPhone will look like and what features it will contain, with concept art popping up all over the Internet. There are so many new concepts appearing every day that we can’t possibly tell you about them all, but when one appears to mimic the design aesthetic of the Apple Watch, we thought you might like to see it.

Popping up over on DeviantArt and put together by StudioMonroe, this iPhone 7 concept borrows from the Apple Watch by having the screen’s glass mould straight into metal at the side of the display. This is a step beyond the slightly curved edges that the iPhone 6 and iPhone 6 Plus’s screens already have, and theoretically allows the iPhone 7 to be made physically smaller while retaining the same screen size as its predecessors.

Also part of that downsizing without reducing screen size is the removal of the Touch ID Home button. According to the concept, any Touch ID feature would be taken care of by a sensor built into the screen just as one of Apple’s own patents explains, while the act of pressing the button to return to the home screen would be taken care of by Force Touch. With Force Touch very much expected to make an appearance in future iOS devices alongside the Taptic Engine, we really wouldn’t want to bet against it.

It’s also worth pointing out that this concept doesn’t seem to have any form of volume controls, but maybe we’re being a tad picky. It’s also likely that such features would be handled on the software side with this particular concept, but we don’t see Apple doing something along those lines just yet, that’s for sure. 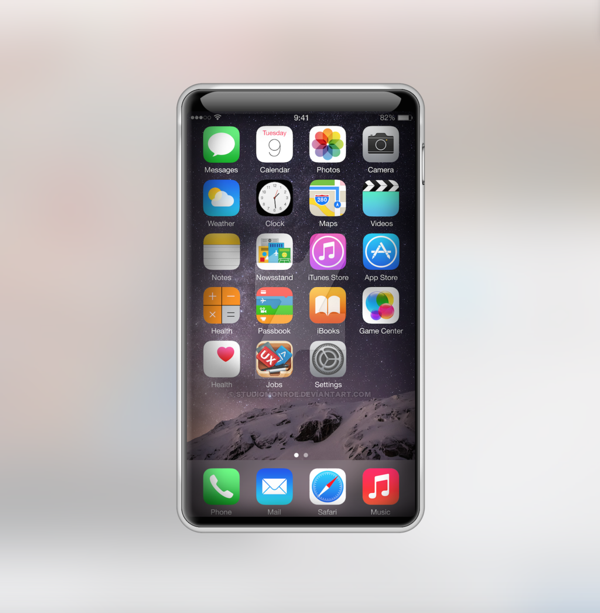 With Apple expected to launch new iPhone come this September, we don’t have to wait too long before we will see what the real iPhone 7 – or more likely iPhone 6s, will look like.