We’ve lost count of the number of times seemingly crazy technology has found its way into everyday hardware years down the line. Come to think of it, there have been some whacky hardware prototypes that have turned into must-have technology – just imagine what a Tablet PC owner would think if you could have put an iPad in front of them way back in the mid 1990s. Technology changes and often ends up making our lives better further down the line, and that’s why we’re so excited about the invisible iPhone concept we just spied over at Engadget. 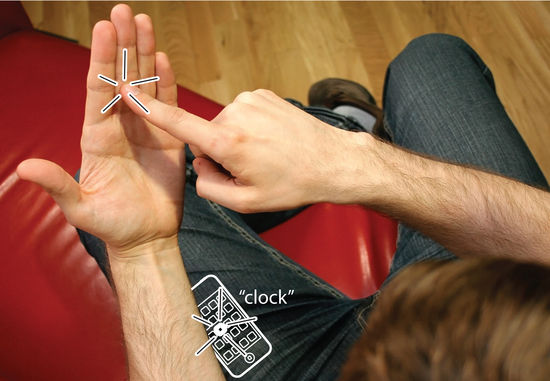 What you’re about to see in the video we’ve helpfully embedded for your viewing pleasure, is a futuristic look at how we could be controlling our iPhones and indeed other computational devices in the years to come.

The concept, put together by researchers at the Hasso-Plattner Institute works by using a depth-sensing camera to recognize where a user is placing their fingers of one hand onto the palm of the other. With a palm taking the place of an iPhone, said users can then interact with their favorite apps as if nothing mind blowing was going on. Your mind is blown, right?

The technology behind the system works thus – video from the camera is sent to a computer which then uses its bespoke software to plot where the user’s finger is touching their imaginary iPhone. The computer in turn sends this data to the iPhone via Wi-Fi. Commands are then carried out on the handset which results in the magic in the video.

If this sounds like a pain to actually interact with, fear not. With so many of us living our lives on our handheld devices the accumulated muscle memory is enough to make us able to use an invisible handset according to MIT’s Technology Review.

In a study that has been submitted to the User Interface Software and Technology conference in October, the researchers found that participants could accurately recall the position of about two-thirds of their iPhone apps on a blank phone and with similar accuracy on their palm. The position of apps used more frequently was recalled with up to 80 percent accuracy.

We’re willing to bet we’re not the only ones now sat trying to use our iPhones with our eyes closed!