i3D App Does Glasses-Free 3D On iPhone 4 And iPad 2, Available For Download Now

Jeremie Francone and Laurence Nigay, two researchers from the Laboratory of Informatics of Grenoble at the EHCI Research Group in France, have created a plausible system for viewing 3D images on iOS devices without glasses, all thanks to the device’s front-facing camera. Interested? 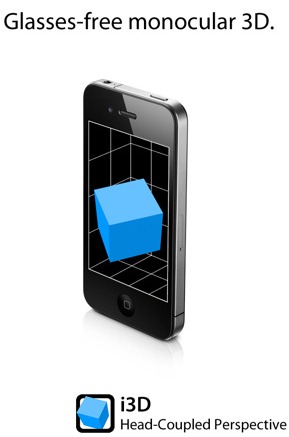 Last month, the researches published a video showing off the technology, which essentially provides full glass-less 3D viewing on iOS devices. The video has received received over 1.5 million views ever since it was published, maybe due to its soothing background music, or more likely due to the amazing technology it’s showcasing. 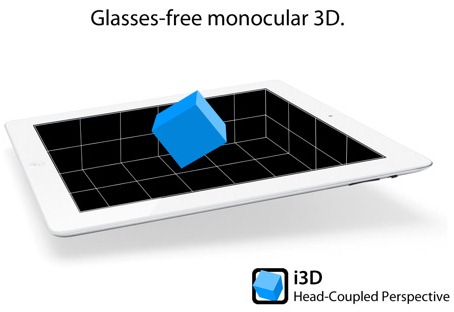 Others have attempted to bring 3D to iDevices. Earlier this year, toy company Hasbro introduced my3D, a set of 3D binoculars that provided a 3D-like experience on the iPhone, with selected apps written specifically with the accessory in mind. It soon became clear, however, that 3D with glasses has its clear shortfalls on mobile devices, a big one being how impractical it is to carry around glasses for a supposedly "portable" device.

This technology, on the other hand, works by tracking the user’s head using the device’s front-facing camera. As the user moves around, the objects on the screen will change their position too, essentially creating a 3D-like effect on a 2D screen.  As explained by one of the researchers:

We track the head of the user with the front facing camera in order to create a glasses-free monocular 3D display. Such spatially-aware mobile display enables to improve the possibilities of interaction. It does not use the accelerometers and relies only on the front camera.

We’re not exactly sure why this method doesn’t make use of the accelerometer and gyroscope. We’re assuming it’s more related to the device’s processing power (or lack of it) and battery life constraints. Still, at least as far as we can tell on the video, this method is pretty darn accurate and if the technology is opened up, or Apple takes it over, it will sure make its way into next-generation apps, including games.

You can try this for yourself by downloading the i3D app from the iTunes App Store for free. Although the demo video features an iPad, this demo app can also run on latest-generation iPod touches and iPhones, although not as smoothly. It’s also important to stress that this is a demo app that will simply let you reproduce what you saw on the video. There’s no other practical app that makes use of this technology as of yet.