Nexus S 4G is the hottest Android phone for folks on sprint and since bootloader has been unlocked with root, there is a raising demand of custom ROM, mods and hacks. Earlier I posted a complete guide on flashing / installing Android 2.3 Gingerbread based CyanogenMod 7.x on Nexus S 4G, and today it’s MIUI ROM that got ported. MIUI is also a custom Android firmware that was born in China, but overtook the whole modding community because of its great functionality and thoroughly optimized user experience. 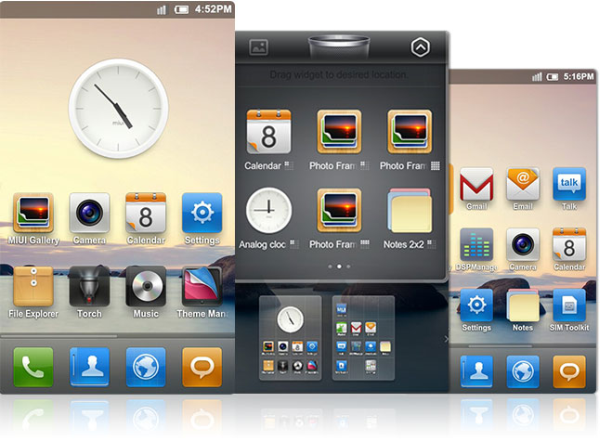 Like CyanogenMod, MIUI ROMs are also based on AOSP Android source code with loads of positive tinkering done to provide optimum user experience with high quality on-board theming aesthetics. Although MIUI ROM stands out because of it’s great looks, but it also managed to draw some criticism because of it’s high level of similarity with iOS. One basic reason that you should get a MIUI ROM on your rooted Android phone is the speed factor. It has been widely noticed that MIUI seriously revitalizes the speed of your Android device along with offering compatibility and ease of use at the same time.

One major drawback , and I believe the only one, is MIUI’s language incompatibility! Because of the fact that it was essentially targeted towards Android users in China, so integrating language packs sometimes can cause loads of trouble. However as there are scores of Android developers working to make the system better, unlike any other popular OS, so you get to have a MIUI build in your language released every now and then.

The MIUI port for Nexus S 4G is now ready but like every other initial code, it has some bugs that need to be addressed fast from developers. The biggest bug so far is losing WiMax capability after flashing this ROM along with some users reporting issues with their Wi-Fi connectivity and MMS. In case you don’t really want to encounter these glitches, then its in your best interest to stay away from this ROM and wait for a stable and bug free build. The credit for this port goes to warttrack from XDA and MIUI Official forums.

And there it is! Your phone is now running MIUI Gingerbread custom ROM on Google Nexus 4G. In case you are stuck, need support or want to give feedback, then head to the official MIUI forums thread posted here.