This Gadget Costs $39, Does Nothing, Nothing At All [VIDEO]

Being the geeks that we are here at Redmond Pie, we appreciate the very cutting-edge in technological advances. Be it the new MacBook Pro or Google’s Project Glass, we’re always interested to see companies and individuals push the boundaries. Despite this, we’re interested in pretty much anything techie, and the Useless Box, brought to our attention by Mashable, is one of the most hilarious inventions we’ve ever seen.

It’s called the Useless Box because it doesn’t actually provide a useful function, but despite the claims by its inventor, we see it as the perfect prank for anybody having trouble keeping their hands to themselves. 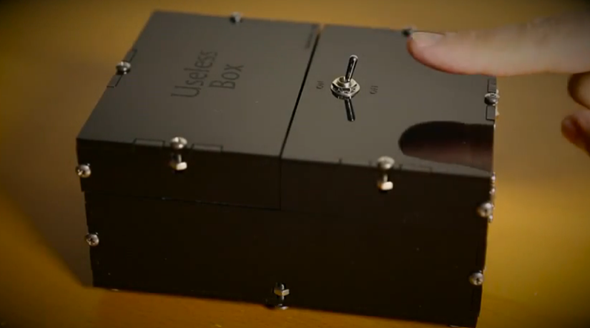 Everybody knows someone who, upon entering an unfamiliar environment, has an incessant need to touch everything in sight – regardless of its how remarkable – or indeed unremarkable, said objects might be. It’s at times like this that the Useless Box comes in extremely handy, and as the demonstration video shows, its prank value is through the roof.

It’s a small, rather mysterious looking box with a single switch, which immediately catches the eye. The temptation would, quite naturally, to flick it and see what happens. Instead of combusting, setting off fireworks, or triggering a 100+ decibel alarm, a small metal contraption pops from the middle of device, and rather arrogantly flicks the switch back.

As displayed in the video clip, it quickly becomes tedious, but the obvious reaction is to keep flicking the switch. The demonstrator even feigns to move his finger before flicking at one stage, as if it would make any difference, and I have to say, the first time I saw the video, I did laugh for a considerable amount of time.

As well as being ideal mechanism to irritate, it can also be a measure of stupidity. You could keep a mental count of how many times a person flicks the switch, and gauge their mental capacity from that. I have spoken to Mensa, and they can confirm this is indeed an accurate test!

Jokes aside, it’s a whole lot of fun for something billed as useless, and for $39.99, you can own your very own Useless Box. For such a cheap price, I’m certainly considering the purchase, as I know plenty of people I could prank with such a quirky bundle of geek.

Would you buy one? Please let us know by dropping a comment via the usual mediums below!