Apple has done a seriously impressive job of continually pushing the boundaries of what we thought was possible on a smartphone since the launch of the original iPhone back in 2007. And if the speculation regarding the next-generation iPhone turns out to be true then it looks like we could be in for yet another treat this coming September. With that said, wouldn’t you just like them to go all out and build an utterly insane device that steps away from the norm and bring some serious next-level features? That’s exactly what artist Jermaine Smith has done with his insane iPhone concept.

It’s usually this time of year that concept renders and mockups start to make an appearance. A few of them are generally based on some level of reality relating to various information and component leaks that find their way into the public domain. However, Smith’s iPhone concept seems to be one man’s personalized vision of the device he would want in his pocket. In terms of its overall visual aesthetics, the concept doesn’t deviate massively from what we already have. But it’s the internal specifications that make this device really stand out. 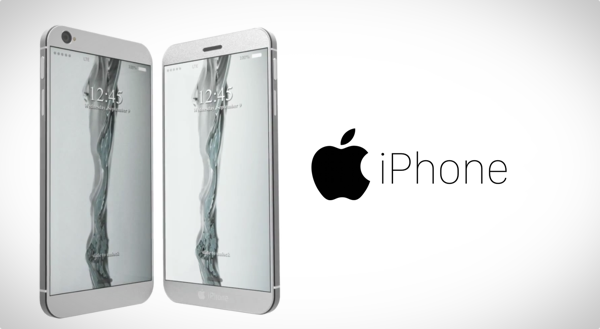 The concept is equipped with dual displays. The main 2K – or Quad HD display – that’s “all about the pixels,” sits proudly on the front of the device allowing users to interact with content in an absolutely beautiful manner. The rear display, a low-resolution, low-power offering, serves up secondary content as well as act as the main power-saving display. In addition to the dual displays, the device also comes equipped with the ability to be charged wirelessly. This is something that we can actually expect in a future iPhone anyway, but we never know what route Apple takes here.

You may notice that glowing red bar that sits proudly on the side of the device. A glowing indicator for notifications similar to the Samsung Galaxy S6 Edge? No, not at all. That glowing component is none other than a laser keyboard that projects a set of virtual keys onto a hard surface for faster, more efficient typing.

Dual displays. Laser keyboard. A single enhanced camera. And a new blue colour option? When can we pre-order this?