Ever wondered what happens to all of that human waste you keep flushing away? While there’s a perfectly reasonable answer to that, bet you never thought it could be used for making clean drinking water did you? Well, Bill Gates will show you how..

Gates Foundation has just initiated an idea, or more precisely a machine that is designed to convert all that waste into clean drinking water, and more so, create electricity while at it. If you didn’t cringe right there, I have been avoiding using the words human feces and drinking water in one sentence. 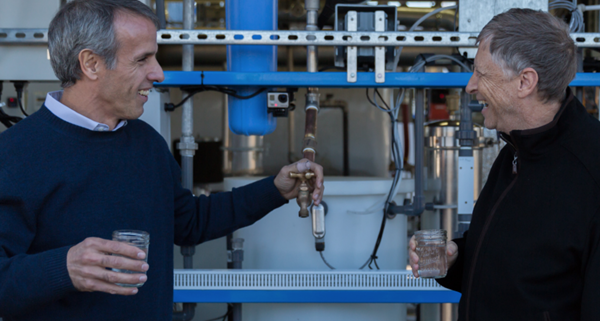 Called the Omniprocessor, the machine is designed and built by Janicki Bioenergy and is part of the Gates Foundation’s effort to improve sanitation in poor and developing countries, where access to clean drinking water and disposal of human waste is a long standing and dangerous issue. Having tasted the water himself, Bill Gates said “And having studied the engineering behind it, I would happily drink it every day. It’s that safe.”

Not only does the Omniprocessor convert human feces into clean drinking water, but in that process all the waste is burnt away at 1,000 degrees Celsius, leaving no stench either. All of this is managed as a self-sustaining process and as explained by Gates himself, “Through the ingenious use of a steam engine, it produces more than enough energy to burn the next batch of waste. In other words, it powers itself, with electricity to spare. The next-generation processor, more advanced than the one I saw, will handle waste from 100,000 people, producing up to 86,000 liters of potable water a day and a net 250 kW of electricity.”

The Omniprocessor is being actively pursued to be put to use in Senegal as a pilot project, however more extensive tests need to be run in order to truly assess the mass deployment benefits of such plants in areas of need. Commenting on the pilot project in Senegal and how it will be handled initially, Gates said, “They will also test one of the coolest things I saw on my tour: a system of sensors and webcams that will let Janicki’s engineers control the processor remotely and communicate with the team in Dakar so they can diagnose any problems that come up.”