More than 100 million people are wearing Apple Watches around the world, according to a new report by Avalon‘s, Neil Cybert.

According to that report, Apple actually went beyond the 100 million user point in December of last year.

Apple first launched the Apple Watch in April of 2015 and it didn’t have the health angle that Apple very much promotes right now. Notably, Cybert believes that 30 million people began wearing Apple Watches in 2020, giving the wearable a huge bump.

In the United States in particular, adoption continues to be particularly high.

Since the U.S. has been an Apple Watch stronghold for years, adoption in the country has trended materially high in comparison to global figures. At the end of 2020, approximately 35% of ‌iPhone‌ users in the U.S. were wearing an Apple Watch. This is a shockingly strong adoption rate that should serve as a wake-up call to Apple competitors interested in the wearables space. Apple Watch turned Fitbit from a household name as the wearables industry leader into a company that will eventually be viewed as an asterisk when the wearables story is retold to future generations. 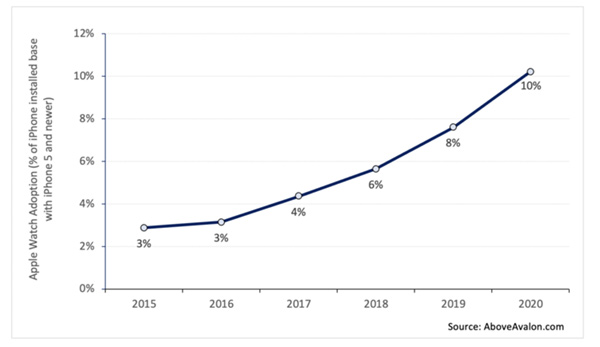 Importantly for Apple, Cybert also believes that adoption can continue to grow with around 35% of iPhone users also wearing an Apple Watch. 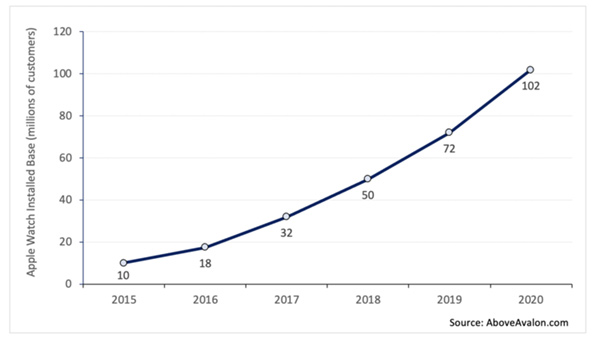 Apple doesn’t share the number of Apple Watches that it sells, leaving analysts like Cybert to make educated guesses based on a number of factors. We might never know how accurate those guesses are.