The Blatant Rip-Offs Of Apple’s MacBook At CES 2016

Making devices that look suspiciously like something Apple designs is nothing new in the tech industry. We all know about the arguments and legal battles that have waged for years between Apple and  Samsung over just how similar some of the latter’s hardware is to the iPhone, and the copying, if you can call it that, doesn’t stop there.

The same thing happens in the world of notebook computers. Apple’s MacBook Air has seen more than its fair share of tribute acts, and it seems that the new MacBook introduced in 2015 is set to endure the same fate after this year’s CES saw the introduction of not one, not two but three new notebook computers that look all too familiar. 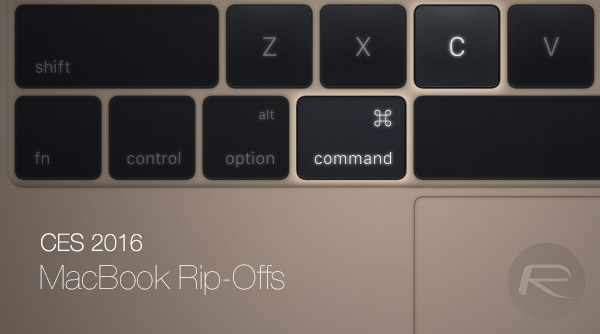 Lenovo’s offering is actually a convertible machine rather than a pure notebook computer, but that is where its uniqueness ends. Design-wise, it looks very familiar to Apple’s 2015 MacBook. Hell even the marketing materials look the same.

Awful name, but gorgeous notebook. This thing looks very much like a MacBook, although considerably larger – LG’s machine comes with a 15-inch screen, which dwarfs Apple’s 12-inch MacBook. The thing even comes in gold. Is everything destined to come in gold nowadays?

The new EliteBook G1 again resemble’s Apple’s MacBook as far as the design goes but unlike Apple’s machine, this one has an optional UHD touchscreen under its belt. Many have wondered whether Apple would make a touch-based notebook, and so far, the answer has been a resounding “no.”

While all of these machines resemble Apple’s new MacBook in varying ways, they all obviously run Windows and offer differing benefits over one another as well as over the MacBook itself. All three also look like they are going to be great machines, but we just wish these companies would do something a little different looks-wise.