The Best New Jailbreak Tweaks For iOS 9 On Cydia

Now that iOS 9 has been jailbroken, developers are beginning to update and even curate new jailbreak tweaks for the latest jailbroken firmware.

Here is a list of some of the best updated or new jailbreak tweaks compatible with iOS 9 that you can install on your iPhone, iPad or iPod touch right now. 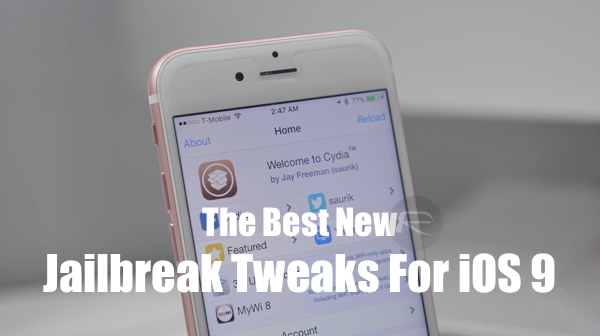 This nifty little tweak brings the iconic Quick Actions menu feature of the iPhone 6s and 6s Plus to older iOS devices. Simply long press or swipe up on an app icon on the Home screen to invoke Quick Actions. The tweak supports all apps that have been updated to utilize Apple’s 3D Touch. The tweak can be found at the BigBoss repository, and is a free download. 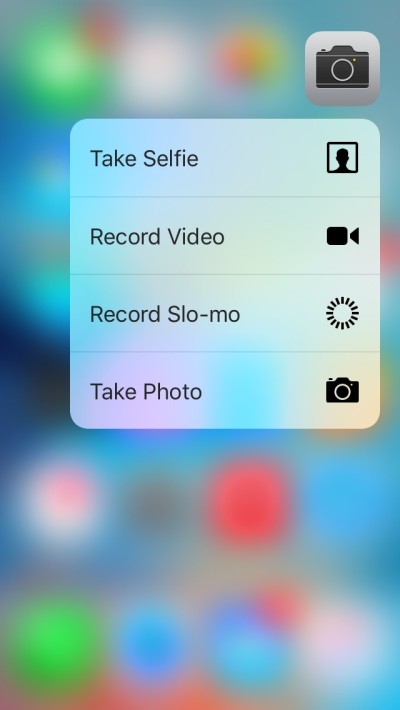 For more information on the tweak, check out our coverage here: Forcy Brings 3D Touch Quick Actions To Older iPhones.

Like Forcy, RevealMenu has been released to mimic Quick Actions on non-iPhone 6s devices. This tweak was released at a time when Forcy didn’t offer support for long pressing on an icon to invoke Quick Actions. 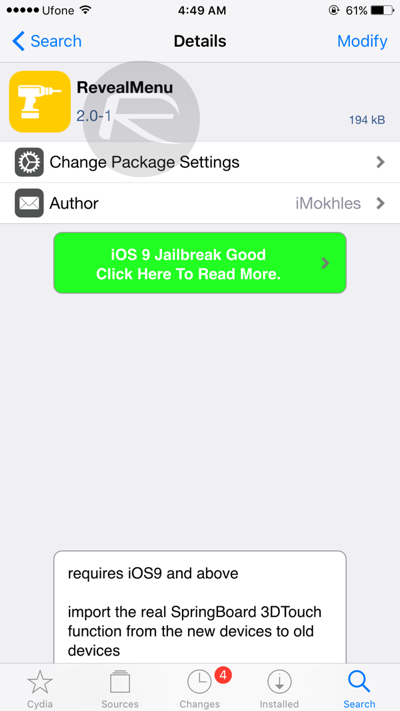 If RevealMenu tickles your fancy, it can be found at the developers repo here: apt.imokhles.com. The tweak is a free download.

We’ve seen Quick Actions being brought over to older iOS devices, but what about the nifty Peek and Pop feature from iPhone 6s and 6s Plus? UniversalForce is the answer to that.

This tweak can be found at the developer’s repo here: repo.ioscreatix.com, and is a free download. 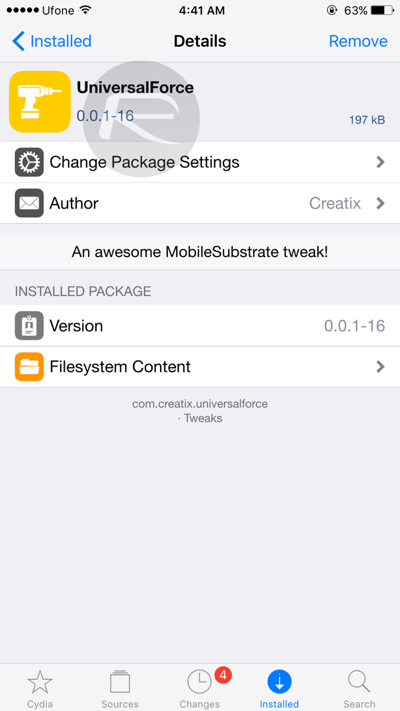 With all those 3D Touch mimicking tweaks surfacing, Hapticle is attempting to bring the iPhone 6s’ Taptic Engine-like haptic feedback on to older iOS devices.

This tweak can be found at the developer’s repo here: repo.fortysixandtwo.com, and is a free download. 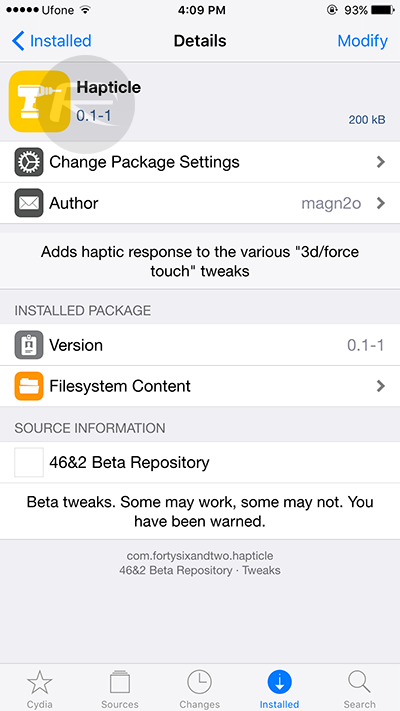 For more information on the tweak, check out our coverage here: Hapticle Adds iPhone 6s Taptic Engine-Like Haptic Response To All iOS 9 Devices.

Strange name for a tweak designed to bring the iPad-only multitasking features of iOS 9 over to unsupported iPads, and even the iPhone. Using Medusa, jailbreakers will be able to make use of the Picture-in-Picture mode, Slide Over and the Split View feature on their devices.

This tweak can be found at the developers repo here: https://repo.cpdigitaldarkroom.com, and is a free download. 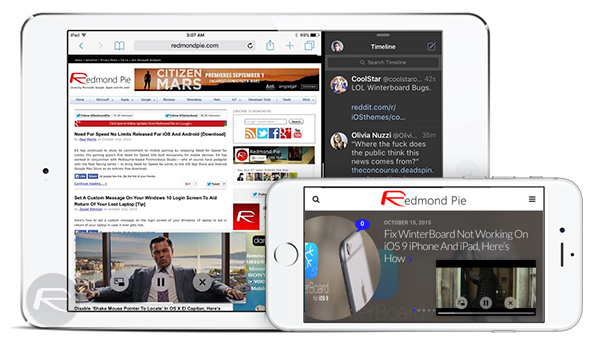 For more information on this tweak, check out our coverage here: Get iOS 9 Picture-In-Picture, Split View On iPhone And Unsupported iPads.

Note: This tweak worked fine for us, but some people have reported it to be causing issues when installed with specific jailbreak tweaks on iOS 9. Install this one at your own risk only. You may end up restoring your iPhone and rejailbreaking.

Apparently, getting your jailbroken iOS device up to par with the iPhone 6s is all the rage right now. In a similar fashion, the old tweak UntetheredHeySiri brings the always-on Hey Siri functionality of the iPhone 6s to older iDevices. 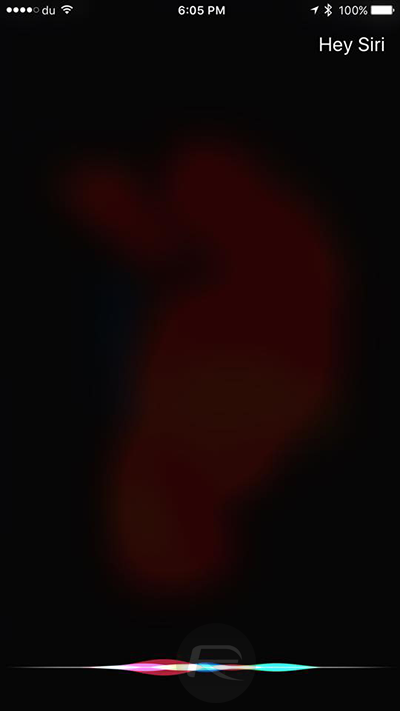 It can be found at the BigBoss repository in Cydia, and is a free download.

The idea behind this tweak is to turn your iOS device’s keyboard into a trackpad for moving the text cursor, just like how it’s done in iOS 9 on iPhone 6s and iPads. It is important to note that this tweak has been around for a while and it doesn’t enable the stock iOS 9 trackpad feature from iPhone 6s and iPads on older iPhones and unsupported iPads, but it’s the closest you can get to the iPhone 6s/iOS 9 feature on unsupported hardware today.

It can be found at the BigBoss repository in Cydia, and is a free download. 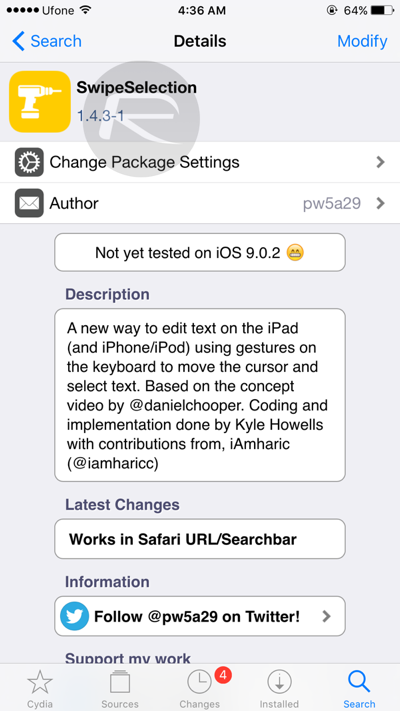 For further information on the tweak, check out our coverage here.

Updated for iOS 9, Speed Intensifier allows you to tinker with iOS animations, thereby giving the impression of an overall faster iOS environment.

It can be found at the developer’s repository here: https://pw5a29.github.io/, and is a free download. 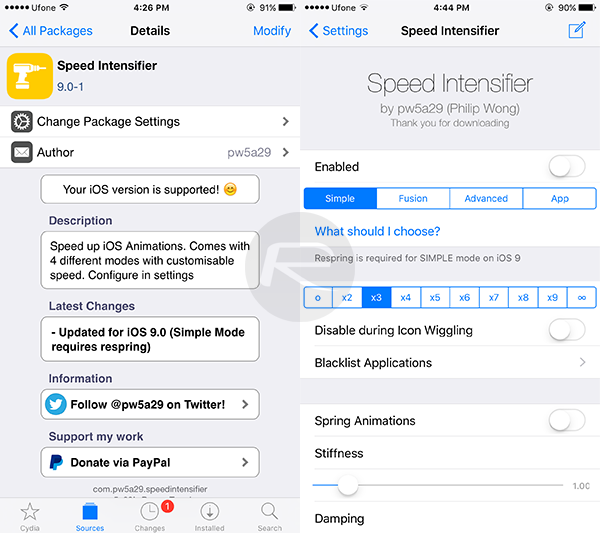 For more information on the tweak, check out our coverage here: How To Speed Up iOS 9 The Easy Way.

Shortcuts tweak attempts to bring the 3D Touch Quick Actions menu to different apps, such as the native Settings.app, Cydia, Weather and many other apps. 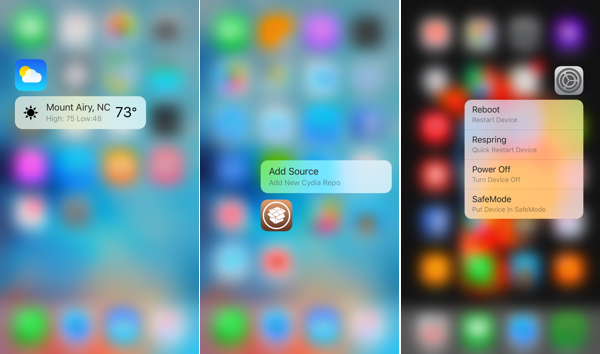 This tweak can be found at the developer’s repository here: https://repo.cpdigitaldarkroom.com, and is a free download.

As the name of the tweak itself suggests, SpotlightBeGone will disable Spotlight in iOS 9, either from the left of the Home screen, the Swipe down from main Home screen, or both of them entirely. Previously available for iOS 8 as well, it has been updated to support iOS 9 now. 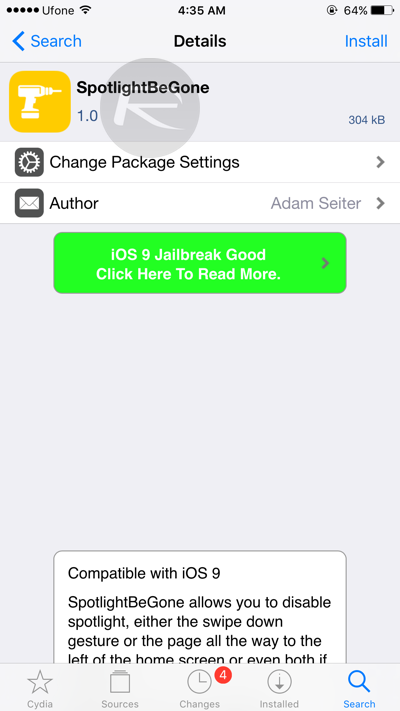 This tweak can be found at the BigBoss repository, and is a free download.

Like PhotosLive tweak before it, this tweak brings iPhone 6s Live Photos functionality to unsupported devices. Best of all, it’s free. 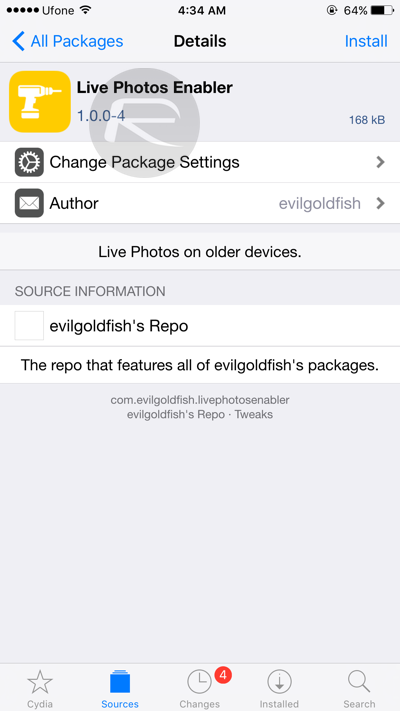 You can download it from developer’s repository from here: https://evilgoldfish.github.io/repo.