Planning on using the latest Pangu 9 jailbreak to liberate your iOS 9-powered iPhone, iPad, iPod touch from Apple’s protected walled garden? The release of an untethered jailbreak solution for iOS 9 – 9.0.2 took many by surprise, but it’s highly likely that there will be a huge list of iOS device owners updating to iOS 9 purely to jailbreak using the latest tool. But what about post jailbreak? What tools, tweaks, and extensions are currently compatible with iOS 9?

We already know that Saurik has updated both Cydia Installer and Cydia Substrate with support for the iOS 9 jailbreak, but what about the popular jailbreak tweaks on Cydia? 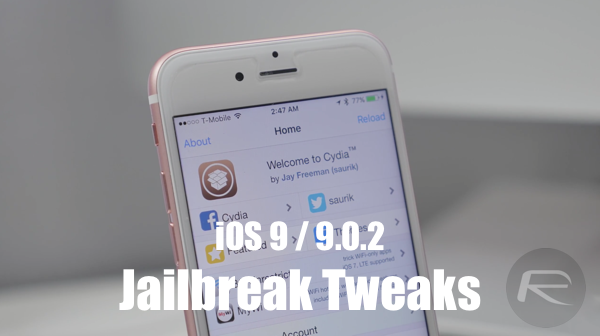 As is usually the case when this type of situation occurs, there’s a public spreadsheet hosted on Google Docs that is constantly being updated as tweaks get tested with the latest version of iOS. Information is recorded against the listing to let the public know if the package is fully or partially functioning, or broken altogether, as well as the version tested and the repository that it’s hosted on. There has been a fair few tweaks tested thus far and the results are a fairly mixed bag in all honesty. There’s good news and bad news for those opting to jailbreak.

Version 2.2.0-1+ of the extremely popular iFile file management tool that seems to be a staple installation for all jailbreakers has been shown to work flawlessly on the latest version of iOS. There’s also an available beta version of the iCleaner package that has been shown to be functioning, although it does come with a warning given the fact that it’s currently still in beta at version 7.5.0. OpenSSH, SwipeSelection, and CyDelete 8 are a few additional packages that seem to be working without any issues on iOS 9.

Unfortunately, the sheet also contains a number of packages that are tagged in red, which means they don’t currently work. The extremely popular Barrel package by Aaron Ash immediately puts the host device into Safe Mode. There’s also issues with packages like F.lux that have been set to require iOS 8, and FutureLock that has been noted to install perfectly fine and not produce any device crashes or locks, but doesn’t actually do anything.

This list will be continuously updated as more and more jailbreak tweaks gets updated to support the latest jailbreak and firmware version. Be sure to check back for updates!